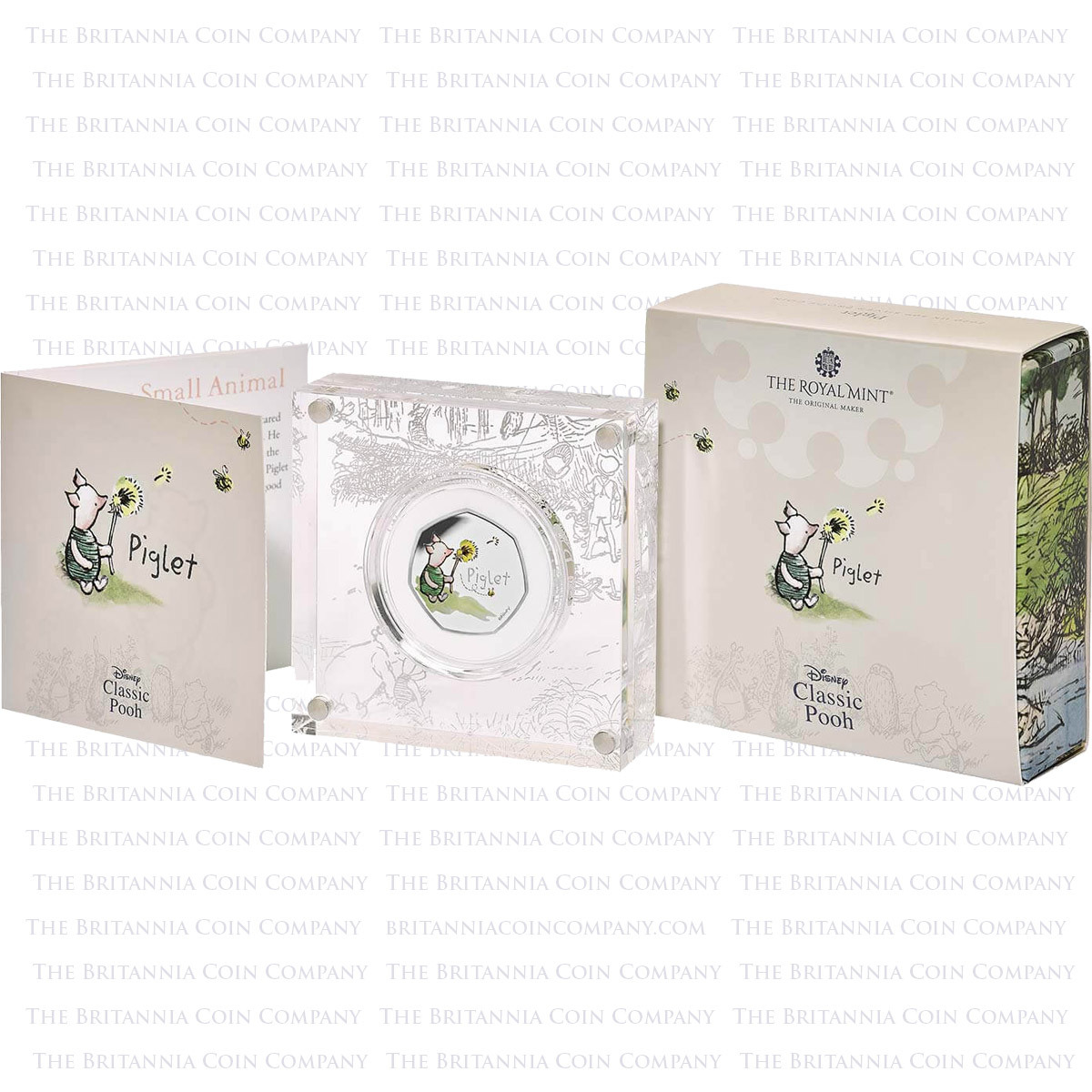 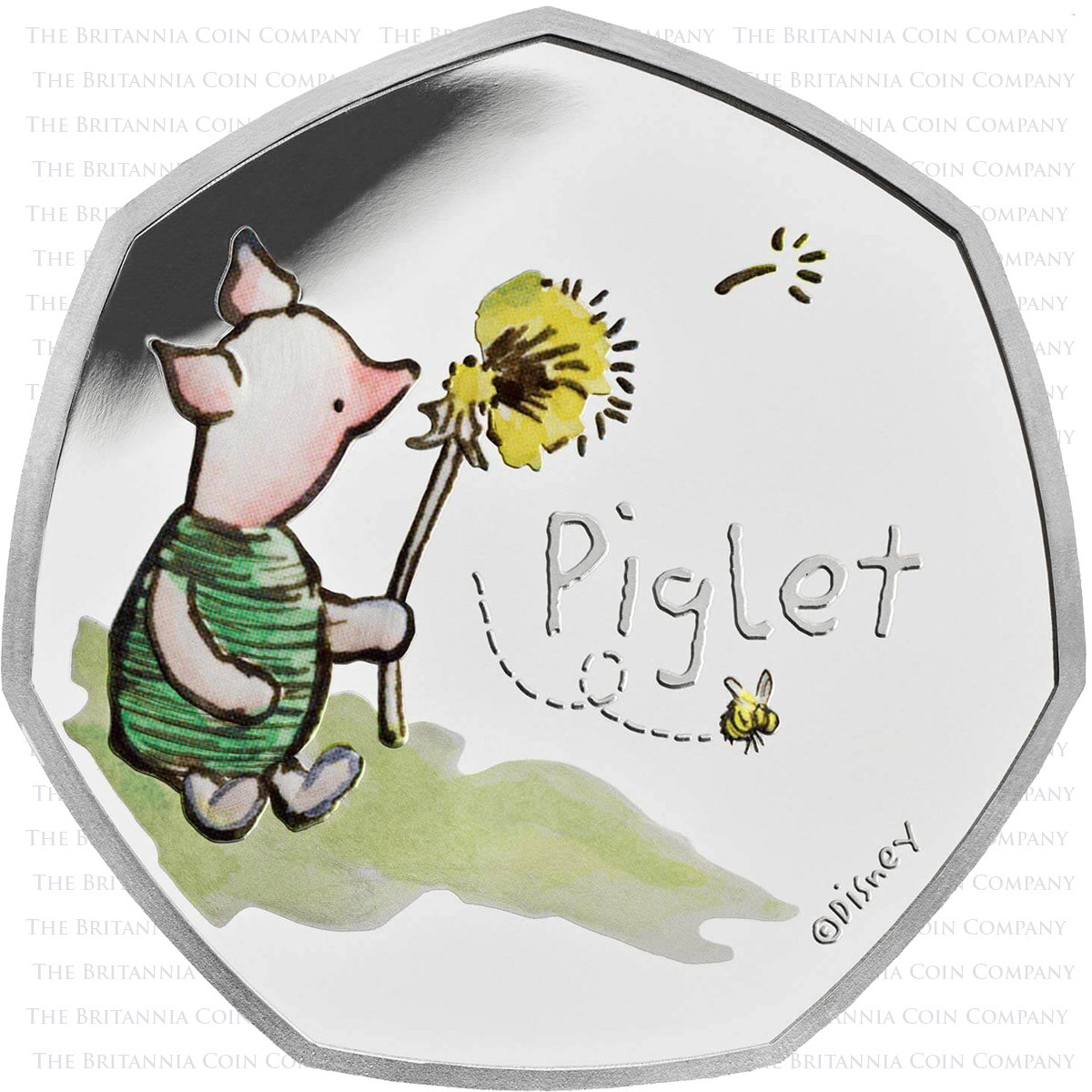 from
£58.33 (excl. VAT)
from £70.00 (inc. VAT)
This limited edition Silver Proof Piglet 50p coin is the third in a set celebrating the characters of beloved children's author, A.A. Milne, named Classic Pooh. The Royal Mint has immortalised Winnie the Pooh, and his fellow inhabitants of the Hundred Acre Wood, in coinage. With a mintage of just 18,000 individually boxed coins, this Silver Proof coin from The Royal Mint is highly sought-after. This special release acknowledging the classic stories of A.A.Milne, features E. H. Shepard's charming illustration: little Piglet blowing at a dandelion almost as big as his head. Endorsed by The Walt Disney Company it is the perfect gift to honour the imagination of the author and the real life boy, Christopher Robin, whose 'silly old bear' adventures captured the nation's heart.
Quantity
Cost Per Unit (excl. VAT)
Cost Per Unit (inc. VAT)
Starts From (inc. VAT)
1+
£58.33
£70.00
£70.00
Track Product
You are not logged in. Please Login to track this product.
Description Summary Specification About 50 Pences Royal Mint About us

“Sometimes,” said Pooh, “the smallest things take the most room in your heart.” Winnie the Pooh was likely referring to his friend Piglet but we're sure numismatists everywhere will agree with the sentiment, particularly with the care and attention devoted to their collections. This Piglet Silver Proof 50p coin is new for 2020. The Royal Mint in partnership with The Walt Disney Company, have created the 'Classic Pooh' series honouring the characters of the beloved children's stories including Piglet. Although Pooh would have likely been more concerned with 'Hunny' than 'Munny', this highly collectible coin series pays an honest tribute to A.A. Milne's beloved creations. Each character was inspired by the toys of Christopher Robin, the real life son of the author who became a protagonist for the books. Just 18,000 individually boxed coins were minted for this nine-coin collection. Encased in decorative acrylic block.

When author Alan Alexander Milne (better known as A.A.Milne) first conceived the idea of turning his son Christopher Robin's toys into books, he could never have foreseen their success. Taught by a young H.G. Wells and having read mathematics at Cambridge, Milne moved to London and forged a career as a freelance writer. Despite being a pacifist, he served as an officer in World War One. After the war, he turned his attention to playwriting before entering the world of children's literature, and ultimately, dreaming up the Hundred Acre Wood residents. The character of Piglet, the namesake of this new coin, is well known for being a loyal friend and having moments of both fear and bravery.

Winnie The Pooh and Friends

For over 90 years, generations of children and adults alike have enjoyed the stories of Winnie the Pooh and his animal friends:

The books are considered to be modern literature classics for children. The stories are also a source of comfort for adults and the character of Eeyore is even said to echo author Milne's own PTSD after fighting in World War One. In 1977, The Walt Disney Company created The Many Adventures of Winnie the Pooh, an animated series inspired by the works of A.A. Milne, which formed the basis for Disney's involvement in creating this Royal Mint series.

The Royal Mint's highly collectible tribute to A.A. Milne's much-loved characters in a nine coin set will evoke nostalgia and the warmest of childhood memories. The latest arrival is this 'Piglet' Silver Proof 50p coin, accompanied by Winnie the Pooh and his woodland friends. Gold and Silver Proofs are available in addition to a series of Brilliant Uncirculated coins. The Disney design of the coins are an immaculate homage to the acclaimed book series that coin collectors will adore.

This Silver Proof 50p coins represents the highest quality of commemorative coins with an unrivalled finish and detail. Proof coins and-finished and inspected to remove imperfections after striking. This 50p coin’s obverse is the Portrait of Her Majesty the Queen, Elizabeth II, by Jody Clark (since 2015).As the longest reigning Monarch, Her Majesty has had Royal Portraits on coins produced by five different artists since her accession to the throne.The first Portrait was created by Mary Gillick, in 1953, followed by Arnold Machin (1968), Raphael Maklouf (1985), and Ian-Rank Broadley (1998). Most recently, the 5th Portrait was designed by The Royal Mint's Jody Clark in 2015.These coins are issued to commemorate special occasions and are intended to be souvenirs and therefore are usually uncirculated coins.

This 2020 Silver Proof commemorative Piglet 50p coin was created at The Royal Mint, the designated place for the UK to mint official coins. Its history dates back well over 1,000 years long before A.A.Milne and son, Christopher Robin, would invent the inhabitants of the Hundred Acre Wood. The Royal Mint was founded in 886, moving to the Tower of London in 1279 where it remained there for over 500 years. Since 2010 it has operated as Royal Mint Ltd, a company owned by HM Treasury, under an exclusive contract to supply all coinage for the UK although it also produces medals and coins for over 60 countries world-wide.

The Britannia Coin Company of Royal Wootton Bassett was established to offer market leading prices to collectors and investors. The Britannia Coin Company buys and sells a wide range of rare, interesting and collectable coins like this 'Classic Pooh' series. The range includes newly minted gold, silver and other precious metal coins to milled, hammered, ancient and landmark issues from across the globe. 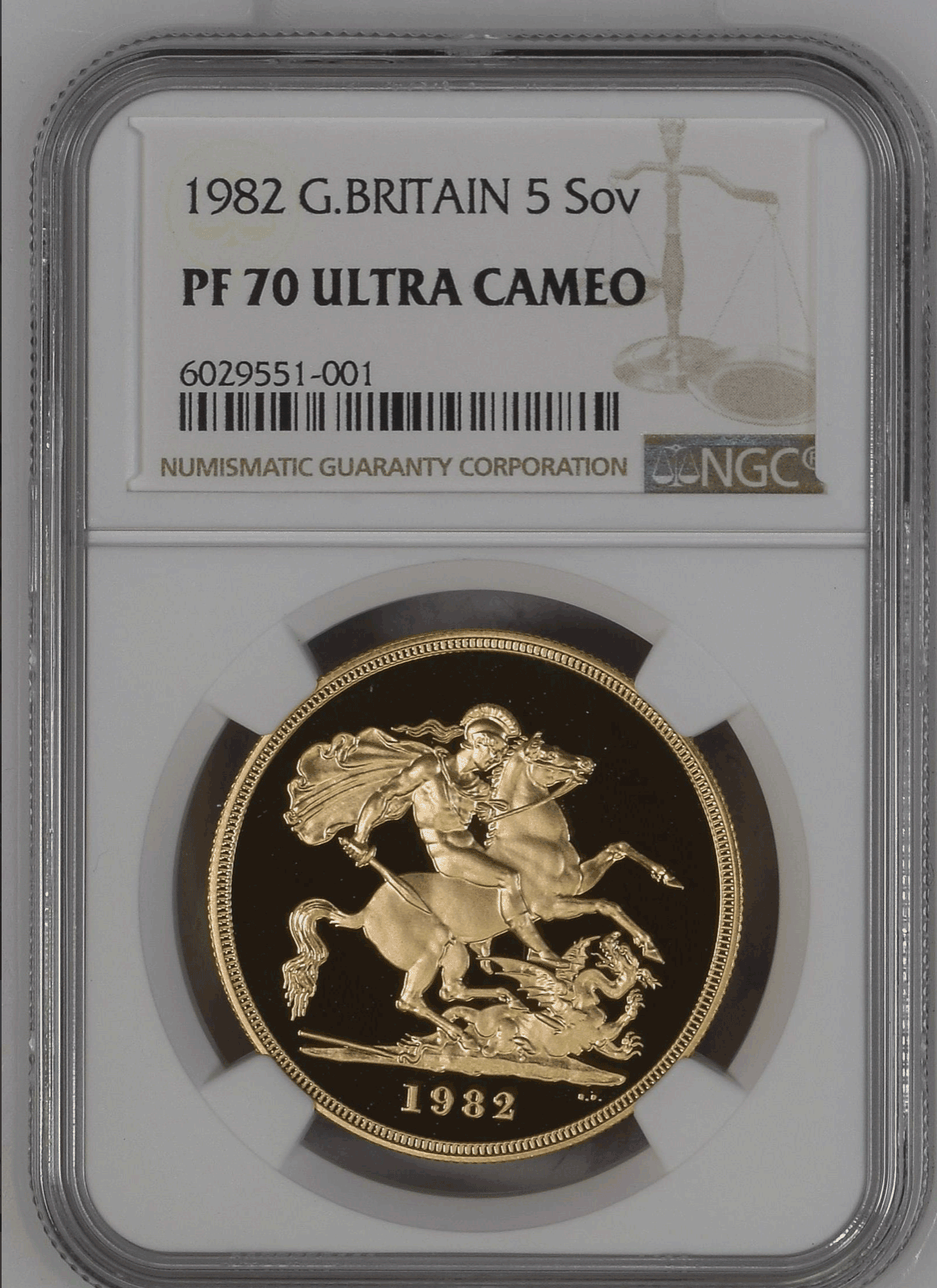