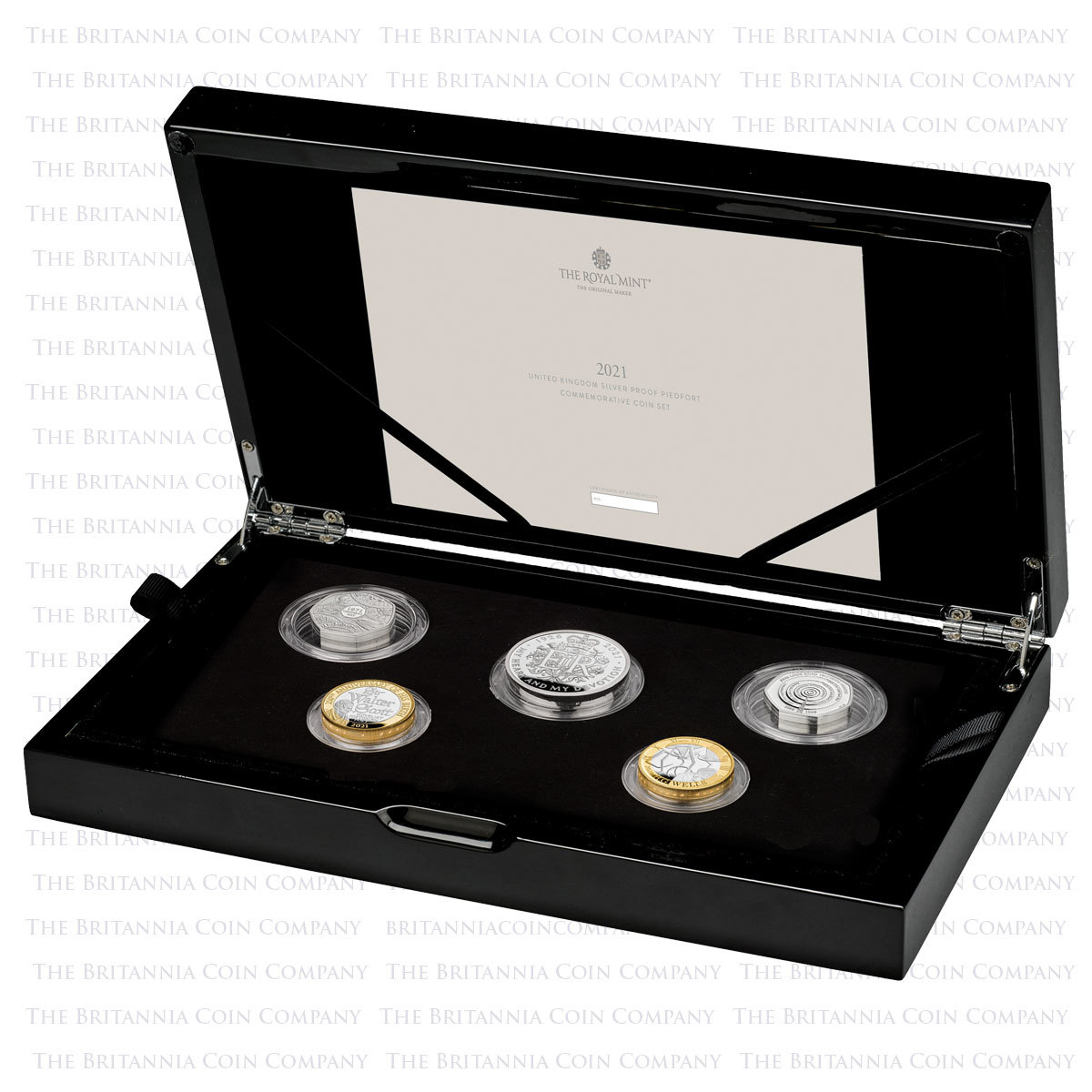 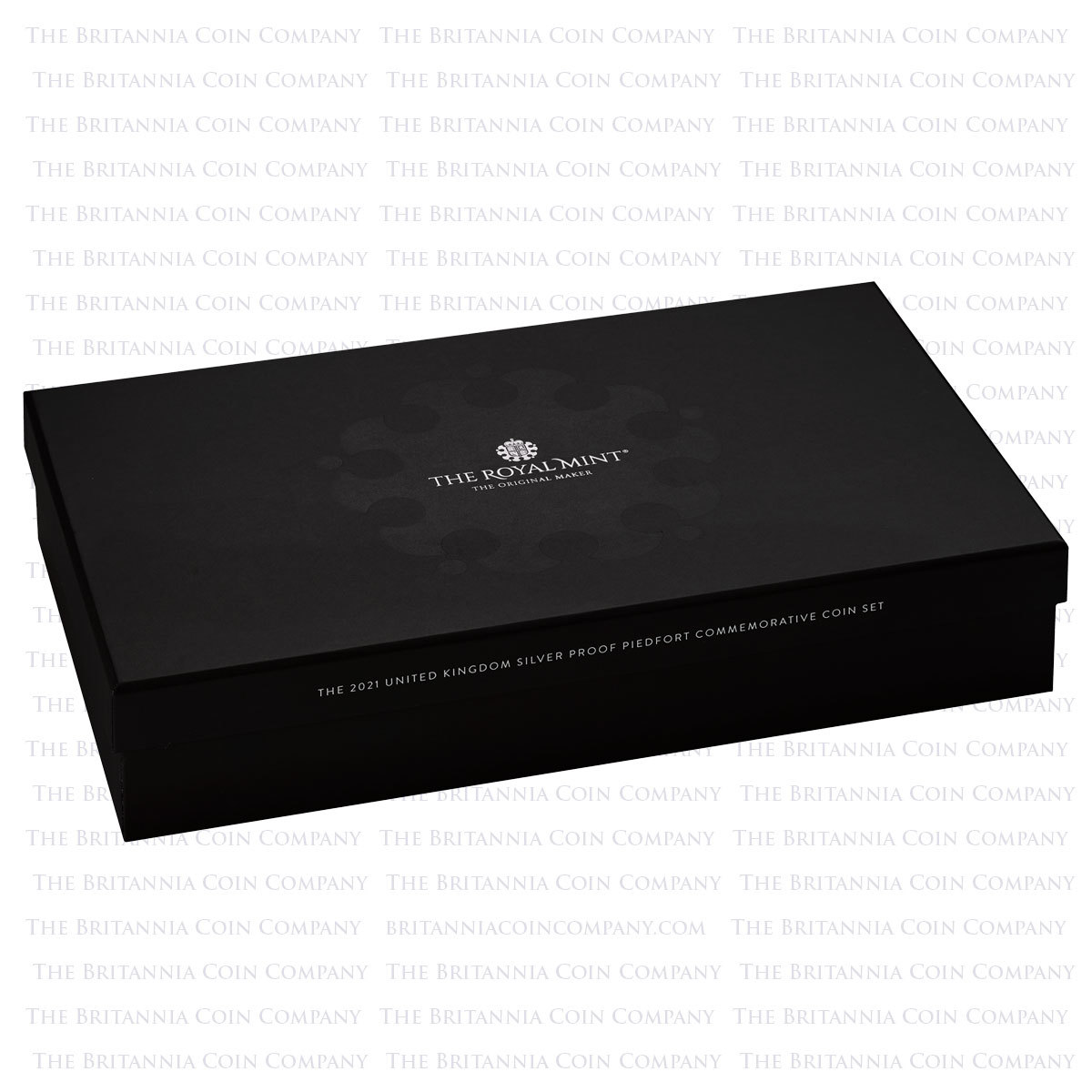 from
£458.33 (excl. VAT)
from £550.00 (inc. VAT)
The 2021 annual silver proof Piedfort coin set has a limited mintage of just 300.
Log in to get notified when this product is back in stock.
Track Product
You are not logged in. Please Login to track this product.
Description Summary Specification About s Royal Mint About us

A limited presentation mintage of only 300 sets. This silver Proof coin set presents special edition coins to mark the milestones of 2021. The Royal Mint collection consists of five commemorative coins; a £5 coin to honour the 95th birthday of Her Majesty the Queen, two £2 coins celebrating novelists H.G. Wells and Sir Walter Scott, and two 50 pence pieces in recognition of John Logie Baird and the 50th anniversary of decimalisation in 1971. The obverse of this five-coin set from The Royal Mint presents the 5th Portrait of Her Majesty The Queen by Jody Clark on all the coins except one. A special version of the 2nd Portrait of HM The Queen, Elizabeth II by Arnold Machin RA, which was first introduced in 1968, is featured on the 50p celebrating 50 years of decimalisation.

The Crown in this 2021 annual set honours The Queen's 95th birthday. Her Majesty has two birthdays as is tradition to permit celebrations during the summer months. Her official birthday takes place in June and her actual birthday is on 21st April. In 2017, Queen Elizabeth II became the UK's longest reigning Monarch, commemorating over 65 years since her accession to the throne. The 2021 design by renowned sculptor Timothy Noad captures the royal cypher of Elizabeth II accompanied by the inscription 'MY HEART AND MY DEVOTION” in reference to the oath she made to the people in her first televised Christmas broadcast in 1957. The broadcast reference is a subtle nod to the television-related motif of this five-coin collection. The edge inscription reads 'FULL OF HONOUR AND YEARS'.

The two-pound coins in this set recognise two treasured writers.

Beyond the walls of The Royal Mint, the year 2021 is predicted to; host a plethora of 2020's cancelled events including the Olympic Games and Eurovision, witness the inauguration of 46th US President Joe Biden, see multiple countries have general elections, witness the second-shortest total lunar eclipse of the 21st century in May, the world taking up “space race” missions and Climate Change carbon-neutral pledges. This Royal Mint 2021 collection marks an extraordinary year for coinage and current affairs. Struck at a higher standard and hand-finished to inspect for imperfections, Proof Piedfort coins are ideal for a serious collector or to mark an important milestone such as a wedding, birthday or anniversary. This five-coin annual set features commemorative coins released in this limited edition presentation for 2021.

Thick and heavy Piedfort coins originate from 12th century France, translating to 'heavy measure'. It is believed that early Piedfort coins were made to act as prototypes of new coin designers for engravers at Mints across the country to follow as an example when creating dies. The weight and thickness of Piedforts helped ensure they weren't mixed up with ordinary coins as legal tender. France minted Piedforts for this purpose for at least another 150 years while the UK ceased Piedfort production under this remit in the Tudor period with the last example being a 1588 sixpence.

From the mid-1500s to the mid-1600s, Monarchs across Europe started the tradition of giving struck-to-order 'prestige pieces' to gift to members of their court. Prestige coins were not as popular in England, with the exception of the gold Double-Sovereigns of Henry VII. The practice stopped in the 18th century.

Modern Piedfort coins were first struck in France in the 1890s as collectors' pieces. British Piedfort production at The Royal Mint did not begin until the 1980s. For the first time, these were also made available to the general public for collectors and investors to purchase in limited quantities. Rarer than standard Proof issues due to the level of craftsmanship and time required, Piedforts are usually only released by The Royal Mint to mark special events and new coin designs.

Proof Piedfort coins showcase the highest standards in minting practice, unrivalled sharpness, and high levels of detail. Hand-finished dies are used to strike Proof coins ensuring that all imperfections are removed. Piedfort coins in particular require an exceptional level of craftsmanship and invested time, leading to their rarer production. Proof coins are frequently purchased by both collectors and investors in coins. This coin set’s obverse presents the 5th Portrait of Her Majesty the Queen, Elizabeth II, by Jody Clark. As the longest reigning Monarch, Elizabeth II has had Royal Portraits on coins produced by five different artists since her accession to the throne. The first Portrait was created by Mary Gillick, in 1953, followed by Arnold Machin (1968), Raphael Maklouf (1985), and Ian-Rank Broadley (1998). Most recently, the 5th Portrait was designed by The Royal Mint's Jody Clark in 2015.

This 2021 annual coin set was created at The Royal Mint. The Royal Mint's millennium-long history is interwoven into the very fabric of British society. As the official producer of all UK coinage, every year, The Royal Mint tests UK coins to ensure conformity to their high standards in a 12th century ceremony known as the 'Trial of the Pyx'. For 500 years, The Royal Mint was located in the Tower of London, before relocating to its new home in Llantrisant, Wales prior to the introduction of decimalisation. Today, The Royal Mint is one of the world's leading mints, trusted with producing global currencies.

Commemorative coins have been issued by The Royal Mint since 1935 to mark moments of great national interest, only becoming an annual tradition in the 21st century. Historically, Crowns were used for this purpose but now other coins such as the £2 coin and 50p are also used to honour special events. Piedfort coins have only been used in the UK to mark special events and new coin designs since the 1980s. They are rarely produced and therefore, a popular choice for collectors and investors.

The Britannia Coin Company of Royal Wootton Bassett was established to offer market leading prices to collectors and investors. The Britannia Coin Company buys and sells a wide range of rare, interesting and collectable coins. These include newly minted gold, silver and other precious metal coins to milled, hammered, ancient and landmark issues from across the globe. Royal Wootton Bassett was awarded Royal status by Her Majesty the Queen, Elizabeth II, in 2011. It is the first town to be awarded such an honour for over 100 years.