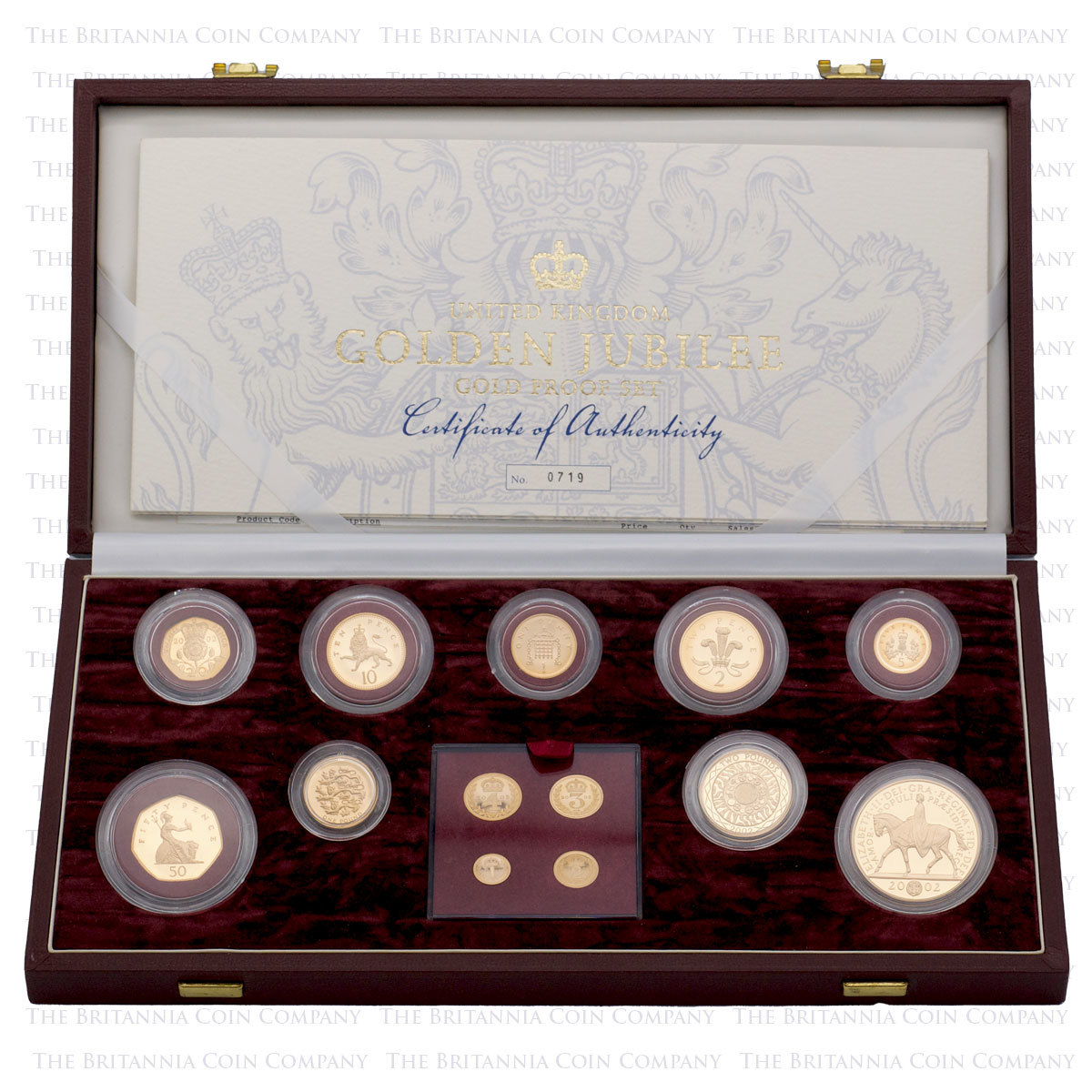 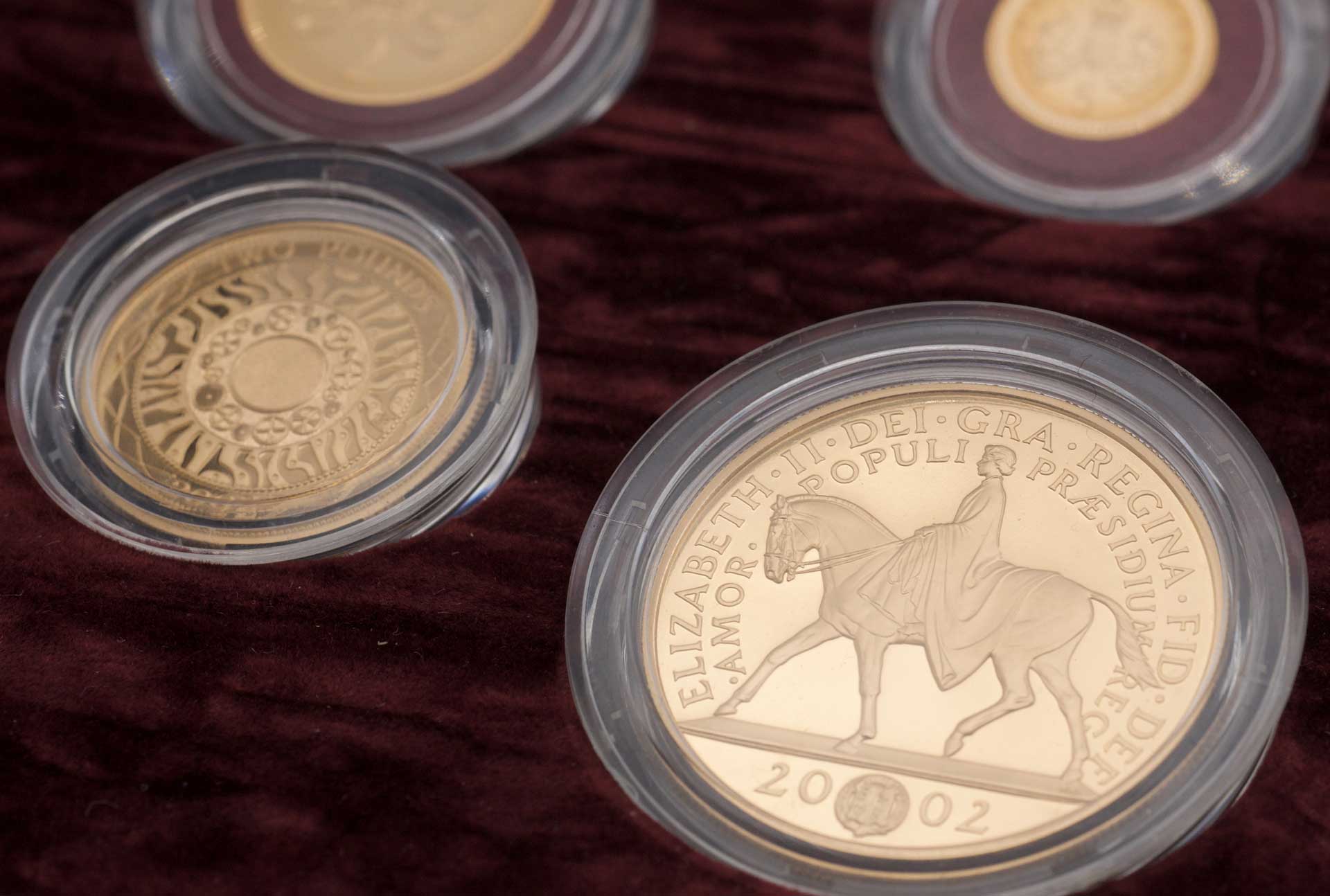 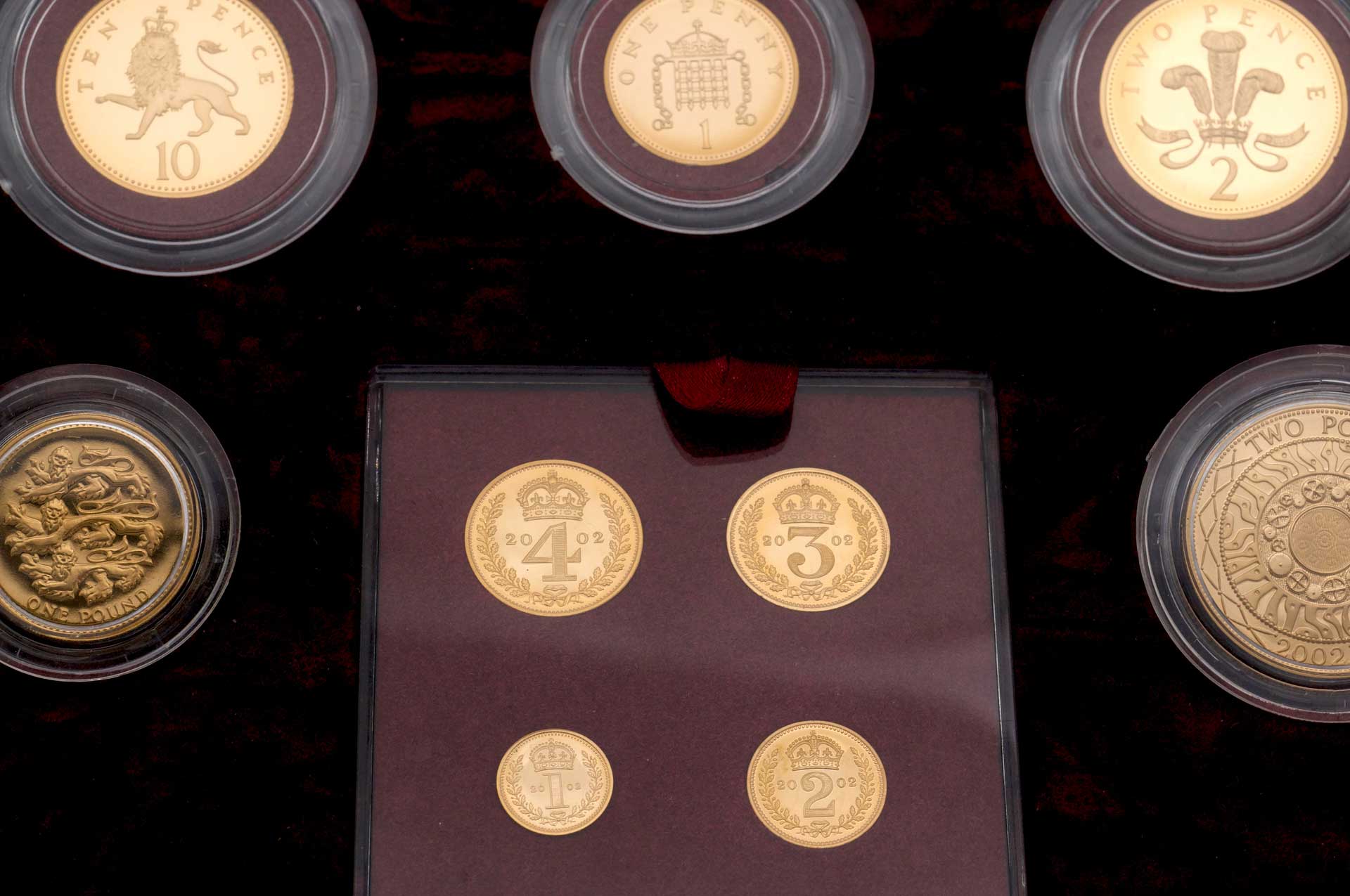 from
£9,995.00
(VAT Exempt)
A remarkable thirteen coin gold proof set, minted to celebrate Her Majesty the Queen's Golden Jubilee in 2002. This stunning set contains examples of all circulating denominations, plus the 2002 Golden Jubilee Crown and 2002 Maundy Money, all in glorious 22 Carat Gold. The largest Gold Proof Set ever offered by The Royal Mint, this example is one of only 2,002 issued. In pristine condition: offered in its original packaging from The Royal Mint with its numbered certificate of authenticity. This is a rare opportunity to invest in a set that has seen reliable and significant increases in value over the last two decades.
Log in to get notified when this product is back in stock.
Track Product
You are not logged in. Please Login to track this product.
Description Summary Specification Royal Mint About us

This incredible 2002 thirteen coin set is the largest Gold Proof annual set that The Royal Mint has ever issued.

In 2002 Elizabeth II celebrated 50 years since becoming Queen. She ascended to the throne following the death of her father, King George VI in February 1952. Elizabeth is one of only three British monarchs to celebrate a golden jubilee, the others being George III and Queen Victoria.

Gold Proof sets have been a perennial presence amid The Royal Mint's high-end commemorative offer for the last few decades. Gold collections of circulating coinage including Sovereign sets are now issued annually, alongside special event sets like those minted for the 2012 London Olympics.

However, the Golden Jubilee Gold Proof Set is unusual in the number of pieces it contains. No other 22 Carat Gold annual set has been released with thirteen coins. The 2002 set, presented in a large red-leather case included all UK decimal currency as well as four Maundy coins.

The largest piece in this thirteen coin set is a:

Rank-Broadley’s official portrait of the Queen, introduced in 1998, features on the obverse of the other annual issues in this thirteen coin set which include:

The four maundy coins represents a very rare occasion that these denominations have been struck in gold. All bear Mary Gillick’s portrait of Her Majesty: the first effigy used on her coinage.

Twenty years since it was issued, this large collection continues to prove popular. We have seen prices rise year on year for the few that come to the market so it's clear that they are a solid investment.

This 2002 proof set is offered in pristine condition in its original case from The Royal Mint. Each coin is encapsulated and all booklets as well as the numbered certificate of authenticity are included.

All coins in this set are legal tender, including the Maundy money, and are, as such, Capital Gains Tax free. They are also VAT exempt as investment gold.