Edward VII was born in 1841. The eldest son of Queen Victoria and Prince Albert, Edward was strictly educated as a child. As he grew up, however, he became rebellious and lived for pleasure. His womanising ways were a pain point for his parents, but he soon became the figurehead of London's high society and beloved by the nation. He spent most of his life as Prince of Wales under his mother's reign and had little to do with state affairs. His diplomacy, however, saw him building relationships between Britain and other European royal families. His reign lasted under ten years and he died in 1910, ending an opulent era for Britain. 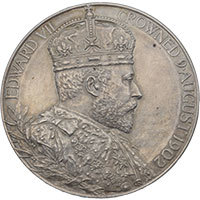 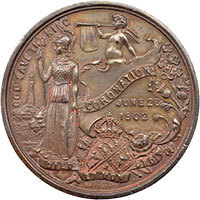 The second child and eldest son of Queen Victoria and Prince Albert, Edward VII was born in 1841. As he grew up, he became the leader of London's high society. His cheerful demeanour and his love of pleasure made him widely popular, both as the Prince of Wales and as king.

Though he grew up as part of a happy royal family, Edward's childhood wasn't all roses. Victoria and Albert were keen that their children were very well educated. Designed by his father to fit Edward's position as heir to the throne, his education was intense and exhausting. The pressure of this strict regime caused him to be rebellious and sullen as a boy.

He attended both Oxford and Cambridge and briefly served in the army. Despite his strenuous education, though, he certainly wasn't prepared for his reign. Though he was given some public duties, Victoria never allowed him to act as her deputy. Offended by his indulgent, high society lifestyle, she also made it obvious she didn't like him much.

His life revolved around pleasure and a touch of scandal. He hunted, he gambled, he enjoyed horse racing, he ate to extravagance, and he had affairs with young actresses, even after his marriage to Princess Alexandra of Denmark in 1863.

In fact, part of the reason his mother resented him was that she partially blamed him for Albert's death – Prince Albert caught typhoid which ended up killing him after travelling to Cambridge to deal with Edward's affair with an actress. Victoria wrote in her diary, ‘Oh, that boy. Much as I pity him, I never can, or shall, look at him without a shudder'.

During his mother's reign, he was allowed very little involvement in state affairs. He did, however, help to foster strong relations between Britain and other European countries. With Queen Victoria living as a recluse on the Isle of Wight after Albert's death, it was down to Edward to represent her abroad. As he travelled across Europe, he worked to build relationships with the continent's other royal houses. It was a job he excelled at. Possibly born from a childhood of dealing with his difficult parents, he was diplomatic, gracious and polite.

After Queen Victoria's death in 1901, it was finally Edward's turn to take the reigns at the age of 59. He brought a sense of sparkle with him to the throne, which had been somewhat glum since his father's death in 1861. His heart largely laid in foreign affairs, so his diplomacy came in handy when he became king too. He was charming and good at dealing with ministers and foreign rulers.

Though by this point the monarchy was symbolic and actually had no power further than its advisory capacity, King Edward VII wanted to avoid war and his diplomatic visits to Europe certainly helped Britain build relationships with its soon-to-be allies. It was because of the bonds Edward built that the Entente Cordiale (informal alliance) between England and France was formed in 1904 and the Triple Entente between Britain, France and Russia in 1907.

Though it's possible we look back at Edwardian England with rose-tinted glasses, especially given the tumultuous times that followed, Edward VII's reign is remembered for the opulence and dignity it spread across Britain.

There was a lot of change politically and socially too. For the country's upper classes, it was a time of indulgence and wealth. Arts and crafts took off, Edward updated royal palaces so their aesthetics would match his sense of fashion, and his luxurious tastes influenced new styles of jewellery and clothing. In stark contrast to the conservativeness of the Victorian Era, society's morals became more relaxed under Edward's influence. There were huge growths in technology, education became mandatory and civil rights movements gained traction.

It all came to an end when Edward died in 1910, ending his long-awaited yet brief reign of just under ten years. Beloved as he was, the nation mourned his passing and he was laid to rest in St George's Chapel in Windsor. His death saw the beginning of a new era, but this one was set to be much more challenging for Britain.

The value of Edward VII coins depends on several factors including the date, the condition and where the coin was minted. High grade branch mint Sovereigns are very sought after. The current gold price will also impact how much your King Edward coins are worth so it’s worth checking out live prices before you sell.

The value of you Edward VII Sovereign depends on the date, where it was minted and the coin's condition. High grade coins (those with little wear and few scratches) are sought-after by collectors, as are coins struck in Australia and Canada, rather than in London. Contact The Britannia Coin Company today for a quote.

Gold Sovereigns struck between 1902 and 1910 featuring a portrait of Edward VII can be very valuable. Carefully examine the ground beneath the dragon on the 'tails' side of the coin. If you can see a tiny letter you could be in luck: this indicates a coin struck in Australia or Canada - the latter are particularly valuable.

The value of Sovereigns minted during the reign of Edward VII can vary drastically. Sovereigns minted at branch mints in Australia and Canada are rarer than those struck in London. Ottawa Mint and some Melbourne Mint Sovereigns can command high prices, particularly examples in good condition.

Selling Edward VII gold Sovereigns is easy with The Britannia Coin Company. Visit our Sell Your Coins page for a free, no obligation quote for your old coins. We offer market leading prices for Edward VII Sovereigns and the best thing is you don’t have to leave your house: simply post your coins to us and get a fast deposit.

The rarest Sovereigns of King Edward VII's reign were minted at the Ottawa Mint in Canada in 1908, 1909 and 1910. You can identify these by the tiny 'C' on the ground below the dragon on the reverse. Other branch mint Edward VII Sovereigns are also sought after including those struck in Sydney and Melbourne.

During the reign of King Edward VII (ruled 1901 to 1910) gold Sovereigns were minted in London as well as at branch mints across the British Empire including three in Australia: Sydney, Perth and Melbourne. In 1908 a new mint was opened in Ottawa, Canada. Sovereigns issued at this mint are quite rare.

Contact The Britannia Coin Company to get a free, no obligation quote for your gold King Edward VII Sovereign. We buy these coins for market leading prices. Visit our Sell Your Coins page for more information on how you can sell your silver and gold Edward VII coins from home and get cash fast.