King Charles I was born 1600 to Anne of Denmark and James VI of Scotland, who also became King James I of England three years after Charles’s birth. He was incredibly unpopular and is remembered for his disputes with Parliament. He dissolved Parliament three times in total and ruled without it for 11 years, a time known as the Personal Rule. England became divided, with some supporting Parliament and some supporting the king, and civil war broke out. In the end, it was decided that peace wouldn’t be achieved whilst Charles was alive so he was tried and executed for treason. After the king’s death, Oliver Cromwell was named Lord Protector and ruled the country as a republic for 11 years. 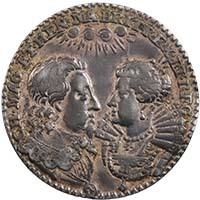 King Charles I was born 1600 to Anne of Denmark and James VI of Scotland, who also became King James I of England three years after Charles’s birth. A rather unpopular king, Charles I ended up finding his fate tied to the execution block. He is, in fact, the only English monarch to be tried and executed. During his reign, he was often in conflict with Parliament – he dissolved Parliament multiple times and, for 11 years, opted to rule without it entirely.

Charles was just three years old when his father left their home country of Scotland to become the king of England, bringing together the countries of England, Scotland and Ireland for the first time.

It was actually Charles’s older brother, Henry, who was destined to take over as king of these three countries once their father’s time on the throne came to an end. If only this had been the case, the story of Charles’s time would look entirely different.

Alas, Henry died in 1612, when Charles was just 12 years old. It was this sad event that propelled Charles into his unforeseen future of becoming king. What awaited Charles was a 24-year long reign full of conflict and disdain from his subjects.

King Charles I and Parliament

Charles’s reign is most remembered for his clashes with Parliament, which started straight away. Many were wary of his religious intentions and worried he was going to reintroduce Catholicism, particularly with his unpopular marriage to Anne, who was Catholic herself. People remembered all too clearly the pain, suffering and instability the religious upheavals of past reigns had caused.

But perhaps an even bigger concern for Parliament was money.

Like his father before him, Charles truly believed that he ruled by Divine Right, that he had God’s authority to rule as he saw fit – a belief that’s evident in his actions as king.

He needed money for his wars abroad so he had to decide whether to take funding from Parliament, which came with conditions, or whether to fund it himself. One of Charles’s first moves was dissolving Parliament in 1625 because they refused to grant him money without his favoured ministers being responsible to Parliament. A year later, he dissolved it again to stop Parliament impeaching one of the king’s favourites, Duke of Buckingham.

In an effort to reinstate the rights of Parliament and to keep the king’s action within the letter of the law, he was forced to sign the Petition of Right to gain funding.

The Personal Rule of Charles I

It didn’t take long for Charles to ignore the Petition of Right. In 1629, he dissolved Parliament once more.

After just four years of being king, Charles set in motion what’s come to be known as the Personal Rule – a period of 11 years from March 1629 to April 1640, during which time he didn’t summon Parliament once.

Charles was ruling as he wanted and it seemed as if peace was finally achieved. But without Parliament’s input, he also didn’t have their ways of raising income. It was only Parliament that could legally levy taxes, after all.

Charles needed money though, so he leveraged medieval laws and put in place measures like forced loans, wardship and, most notoriously, ship money. Coastal counties were once required to provide the monarch with ships but Charles twisted the law into a monetary tax that he not only levied on the coastal counties but on the inland ones too.

Naturally, his methods were incredibly unpopular and more and more people became opposed to the king, even those who were previously supporters of the Crown.

In April 1640, he was forced to recall parliament to help him suppress rebellion in Scotland. He’d tried to impose a High Church liturgy and prayer book and the Scottish people were far from happy about it. An Edinburgh riot in 1637 soon grew into widespread unrest.

However, the Short Parliament, as it became known, denied Charles's request for money to fund the war against the Scots and the king dissolved it within weeks.

Charles recalled Parliament in November 1640. This time, Parliament passed an Act that meant it could not be dissolved again without its agreement and, a year later, it passed the Triennial Act, which stated Parliament had to be called every three years. Parliament also issued a Grand Remonstrance, detailing their grievances with the king and demanding that his ministers be responsible to Parliament.

The conflicts between the two divided the country and eventually led to two English civil wars between 1642 to 1648. It was a mess, with the Royalists supporting the incompetent King Charles and the Roundheads that supported Parliament.

The End of a Stubborn King

In the end, Charles’s stubbornness in the battle between the power of the monarchy and that of Parliament cost him not only the throne but his life too.

The king was eventually captured by the Scots and handed over to Parliament. Eventually, Parliament put him on trial for treason, sure that peace could never be acheived whilst the king was still alive. Charles was found guilty and was executed by beheading on the 30th of January 1649.

Unusaly, there was no new king or queen crowned upon Charles’s death. Instead, England was ruled as a republic by Lord Protector Oliver Cromwell for 11 years. In 1651, Charles I’s son was crowned King Charles II in Scotland and marched to England, flanked by a Scottish army. The new king was defeated by Cromwell, however, and fled to France, where he stayed until 1660, when the monarchy was finally restored.