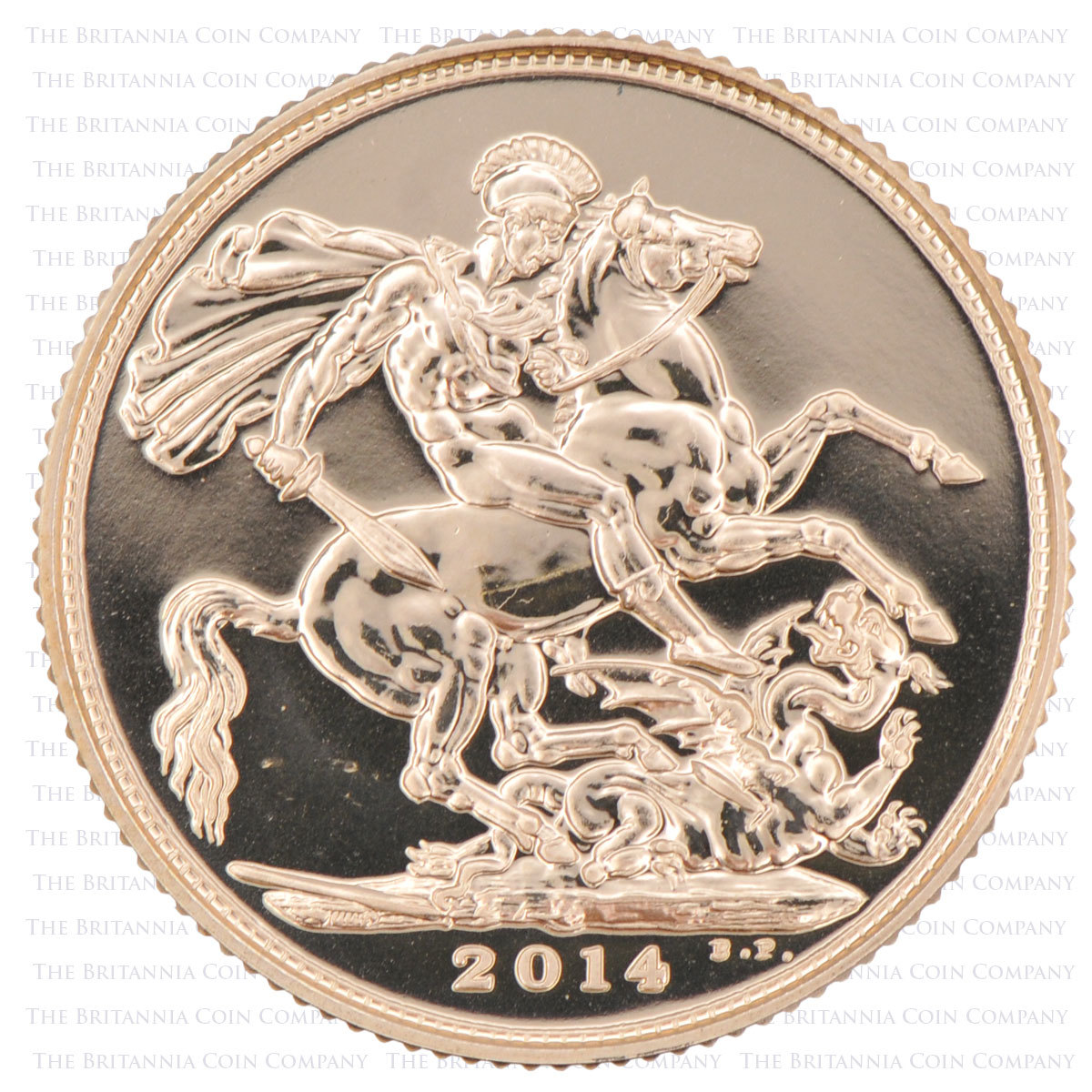 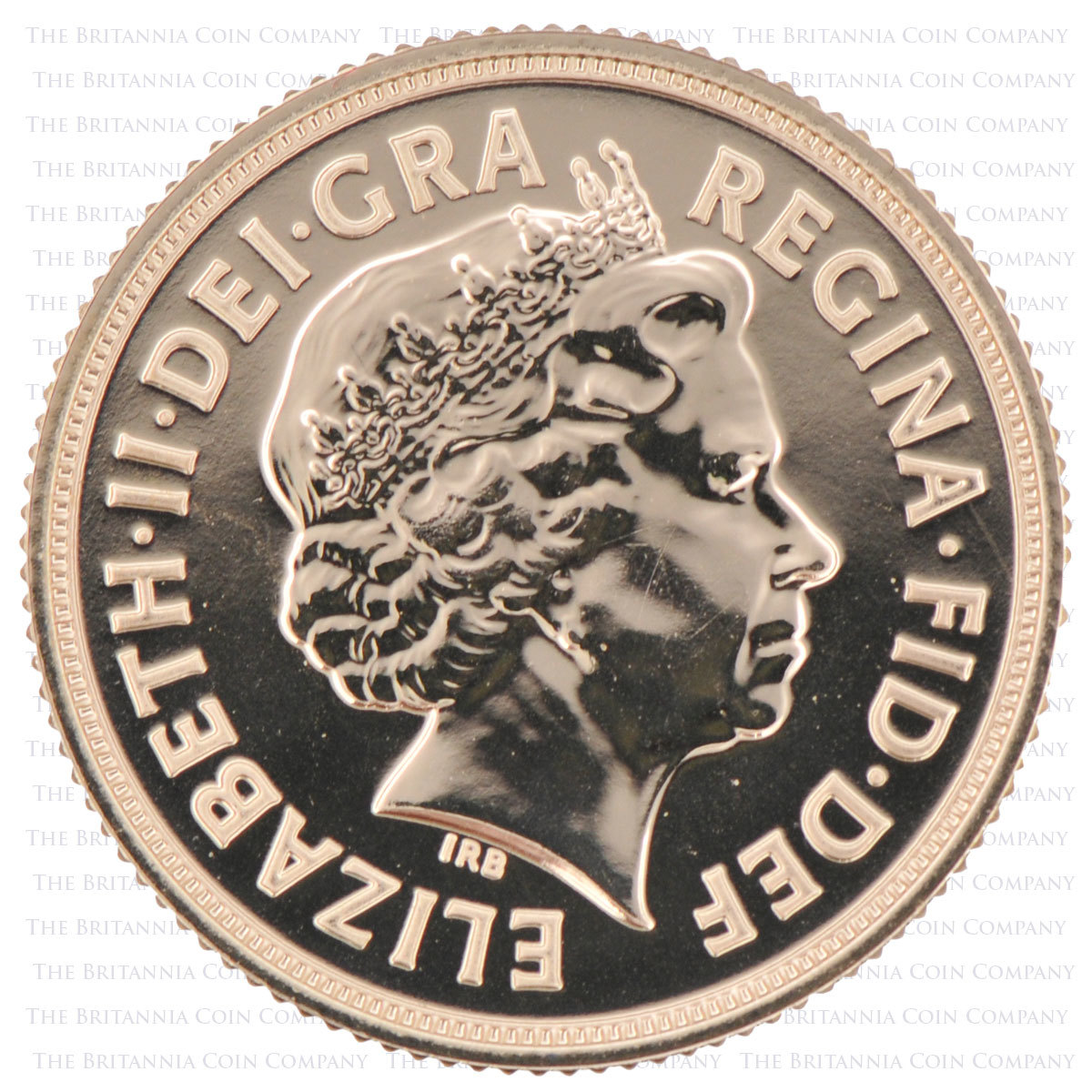 from
£401.09
(VAT Exempt)
2014 Sovereign gold bullion coin from The Royal Mint. High grade stock, carefully selected by us and graded at aEF (about Extremely Fine) or above. Extremely Fine coins carry very few marks or signs of wear and therefore make an ideal choice when buying specific dated coins as gifts. This coin features the signature 'St George and the Dragon' Sovereign coin Reverse design by Benedetto Pistrucci. The coin's Obverse hosts the 4th Portrait of Her Majesty the Queen, Elizabeth II, by Ian Rank-Broadley. The Sovereign is exempt from VAT and Capital Gains Tax and our price is inclusive of fully insured UK shipping.
Quantity
Cost Per Unit
Starts From
1+
£401.09
£401.09
Track Product
You are not logged in. Please Login to track this product.
Description Summary Investment Info Specification About Sovereigns Royal Mint About us

The gold Sovereign has a five-century long association with national pride, prestige and exceptional minting quality. The 2014 gold bullion Sovereign coin hosts a portrait of Elizabeth II. HM Queen Elizabeth II is the current and longest reigning British monarch ever. Born on 21 April 1926 to King George VI and Elizabeth Bowes-Lyon, she became Queen in 1952 and her Coronation was on 2 June 1953. In 2014, a 1953 Sovereign sold at auction for £384,000.

Beyond the walls of The Royal Mint, 2014 witnessed many significant events; Russia spending a record $51bn hosting the Olympic Games in Sochi, tensions growing between Russia and Ukraine leading to protests in Kiev and the annexing of Crimea, the disappearance of Malaysian Airlines flight 370 over the Indian Ocean, the so-called Islamic State formed in Syria, and a K-pop record hit the world charts for the first time with Psy's 'Gangnam Style'. The year 2014 was a significant year in history, now immortalised in coinage.

The Obverse (front, heads) presents Queen Elizabeth II's fourth portrait by Ian Rank-Broadley. Her Majesty is posed in the Royal Diamond crown, which she wore for her coronation, and this design has been used on gold Sovereigns since 1998.

The Reverse (back, tails) of the 2014 gold bullion Sovereign coin is that of the classical portrayal of 'St George slaying the Dragon', designed by Benedetto Pistrucci. St George, the Patron Saint of England, is on horseback, sword in hand. On the floor to the left is a broken spear from a previous offensive. Pistrucci's depiction dates back to 1817. He designed and engraved the artwork himself and was paid just 100 guineas for his services.

The 2014 gold bullion Sovereign coin may be supplied in an acrylic capsule.

This gold Sovereign coin benefits from being verified at the Trial of the Pyx for its weight and quality. The Trial of the Pyx is one of Britain's oldest traditions, dating back to at least 1282 during the reign of Edward I. The ceremony usually includes; the Chancellor of the Exchequer, financial leaders, The Royal Mint's representatives and freemen of The Goldsmiths' Company. Coins are taken from every batch of each denomination struck, sealed in bags of 50 and locked away for testing at the Trial. The 'Pyx' is latin referring to the chests used to transport and store the coins. The ritual involves putting the coins in a copper bowl and selecting at random for testing. Each coin is checked to ensure it meets the specifications set out in the relevant section of the Coinage Act or Royal Proclamation.

This 2014 gold bullion Sovereign from The Royal Mint is subject to our stock availability. The Sovereign is one of the most popular and easiest ways to invest in gold Bullion.

The gold Sovereign has a five-century long association with national pride, prestige and exceptional minting quality. This Sovereign coin is struck to Bullion standard and has legal tender status. The coin's Obverse presents the 4th Portrait of Her Majesty the Queen, Elizabeth II, by Ian Rank-Broadley. As the longest reigning Monarch, Her Majesty, The Queen has had Royal Portraits on coins produced by five different artists since her accession to the throne. The first Portrait was created by Mary Gillick, in 1953, followed by Arnold Machin (1968), Raphael Maklouf (1985), and Ian-Rank Broadley (1998). Most recently, the 5th Portrait was designed by The Royal Mint's Jody Clark in 2015.

The 2014 Sovereign coin was produced at The Royal Mint, which is the designated place for the UK to mint coins. Its history dates back well over 1,000 years and produces currency for over 60 countries. As one of the world's leading Mints, The Royal Mint has also helped to establish Mints in Australia, South Africa, Canada and India.

The Royal Mint first moved to the Tower of London in 1279 and remained there for over 500 years. When decimalisation was introduced in 1971, all The Royal Mint's coin production was relocated to Llantrisant, Wales. A gold Sovereign was the last coin struck in London in November 1975. Its newer Welsh location features a state-of-the-art visitor centre open to the public where you can see the engravers work their magic!