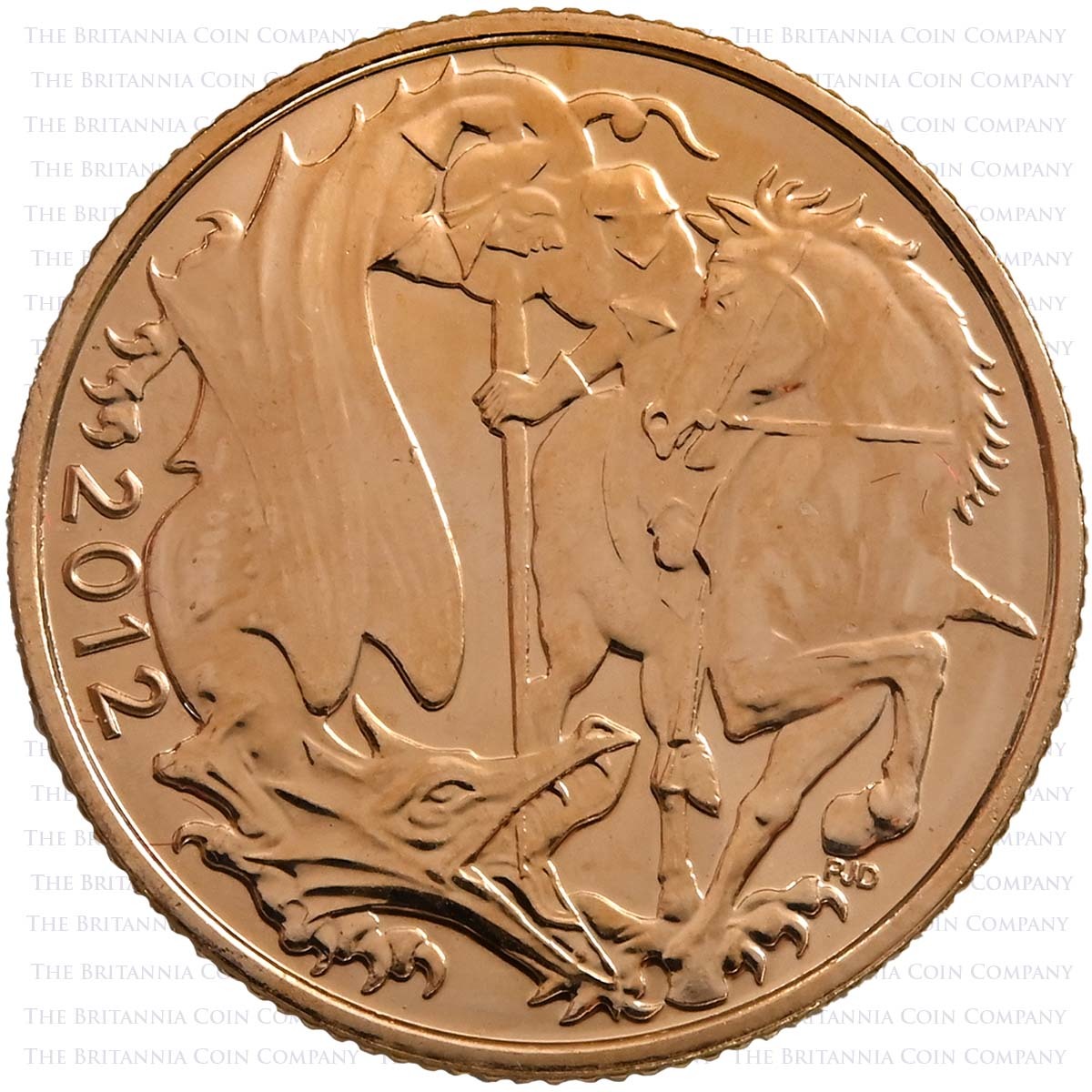 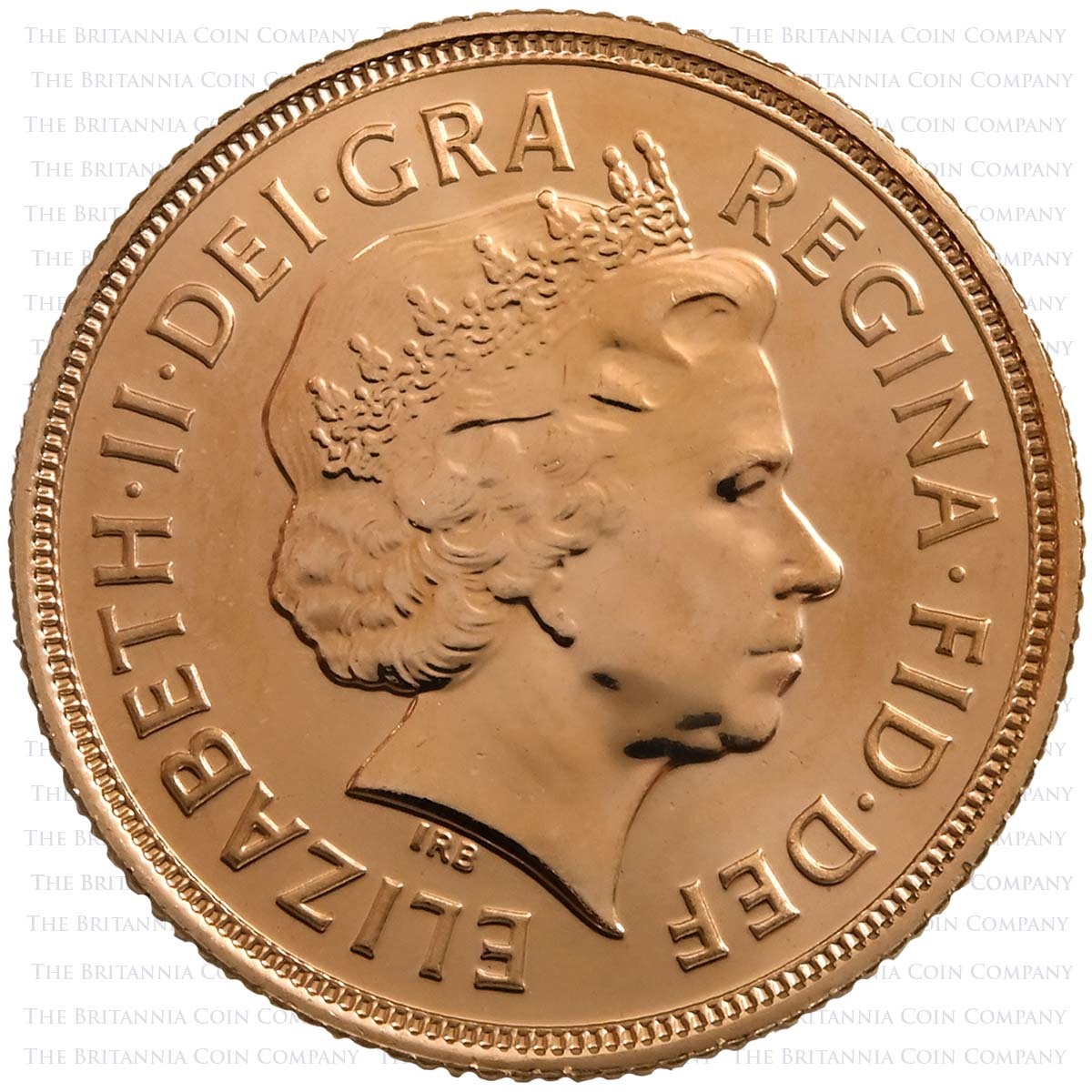 from
£395.40
(VAT Exempt)
2012 gold bullion Sovereign coin from The Royal Mint. High grade Bullion stock, carefully selected by us and graded at aEF (about Extremely Fine) or above. Extremely Fine coins carry very few marks or signs of wear and therefore make an ideal choice when buying specific dated coins as gifts. Bullion coins are also more cost effective to purchase compared to Proof coins of the same date. This coin features a new take by Paul Day on the classic 'St George and the Dragon' Reverse design by Benedetto Pistrucci. The coin's Obverse hosts the 4th Portrait of Her Majesty the Queen, Elizabeth II, by Ian Rank-Broadley. Released in the year of Elizabeth II’s Diamond Jubilee. The Sovereign is exempt from VAT and Capital Gains Tax and our price is inclusive of fully insured UK shipping.
Log in to get notified when this product is back in stock.
Track Product
You are not logged in. Please Login to track this product.
Description Summary Investment Info Specification About Sovereigns Royal Mint About us

Gold Sovereigns are maybe the most famous of all gold coins and much sought after by both coin collectors and Bullion investors. Sovereigns have a long history dating back to 1603 but the contemporary gold Sovereign has been minted in Britain since 1817, and again from 1817-1917, 1925, 1957–59, 1962–68, 1974, 1976, 1978–82 and 2000 to date. The Sovereign disappeared from circulation during the First World War and did not return after the war, although colonial Mints continued to produce the Sovereign until 1932.

The gold Sovereign is associated with national pride, prestige and exceptional minting quality. The 2012 gold bullion Sovereign coin hosts a portrait of Elizabeth II. HM Queen Elizabeth II is the current and longest reigning British monarch ever. Born on 21 April 1926 to King George VI and Elizabeth Bowes-Lyon, she became Queen in 1952 and her Coronation was on 2 June 1953.

Beyond the walls of The Royal Mint, 2012 was characterised by; the Olympic Games held in London, US President Barack Obama's re-election, and HM Queen Elizabeth II celebrating her Diamond Jubilee. The year also witnessed; the deaths of singer Whitney Houston and Moon-walking astronaut Neil Armstrong, the UK Government proposing a controversial 'Snoopers Charter', the world skydiving record broken by Felix Baumgartner, and 14-year-old Malala Yousafzai narrowly escaping a Taliban shooting after campaigning for the right to go to school. The year 2012 was a poignant year in history, now immortalised in coinage.

2012 saw a new interpretation by Paul Day of the classic Benedetto Pistrucci 'St George and Dragon' design. This special reverse was created in honour of Elizabeth II's Diamond Jubilee.

Elizabeth II's accession to the throne took place on the death of her father, King George VI in 1952. Young Elizabeth was just twenty-five-years-old when she became Queen. Her Coronation at Westminster Abbey was the first to ever be televised, watched by 27 million people across the globe. Her Majesty has dedicated her life to public service.

Sixty years on, The Queen's long reign has witnessed numerous major events, which include;

On the event of her Diamond Jubilee, a programme of special celebratory events took place such as; Royal Borough status being given to Greenwich, the awarding of 440,000 Diamond Jubilee medals to those in public service, and 'Big Jubilee Lunches' were held across the UK by citizens.

The Obverse (front, heads) presents Queen Elizabeth II's fourth portrait by Ian Rank-Broadley. Her Majesty is posed in the Royal Diamond crown, which she wore for her coronation, and this design has been used on gold Sovereigns since 1998. The idea of replacing the Maklouf portrait occurred during a competition to design the Obverse of the 1997 Golden Wedding crown.

The Reverse (back, tails) of the 2012 gold bullion Sovereign coin is a new take on the classical portrayal of 'St George slaying the Dragon', originally designed by Benedetto Pistrucci. The new design by Paul Day was created in honour of Queen Elizabeth II's Diamond Jubilee and shows St George on horseback with sword in hand, slaying the dragon. Pistrucci's original depiction dates back to 1817. He designed and engraved the artwork himself and was paid just 100 guineas (the equivalent of around £8,000 today) for his services.

The 2012 gold bullion Sovereign coin may be supplied in an acrylic capsule.

This high grade 2012 gold Bullion Sovereign from The Royal Mint is subject to stock availability. The Sovereign is one of the most popular and easiest ways to invest in gold Bullion.

The gold Sovereign has a five-century long association with national pride, prestige and exceptional minting quality. This Sovereign coin is struck to Bullion standard and has legal tender status. The coin's Obverse presents the 4th Portrait of Her Majesty the Queen, Elizabeth II, by Ian Rank-Broadley. As the longest reigning British monarch, Her Majesty, The Queen has had Royal Portraits on coins produced by five different artists since her accession to the throne. The first Portrait was created by Mary Gillick, in 1953, followed by Arnold Machin (1968), Raphael Maklouf (1985), and Ian-Rank Broadley (1998). Most recently, the 5th Portrait was designed by The Royal Mint's Jody Clark in 2015.

The 2012 Sovereign coin was produced at The Royal Mint, one of the world's leading Mints, which is the designated place for the UK to produce its coinage. Its history dates back well over 1,000 years and produces currency for over 60 countries. A gold Sovereign was the last coin struck in the Tower of London in November 1975, before all Royal Mint production moved to its new home in Llantrisant, Wales after decimalisation in 1971.

In the same year of this coin's release, 2012, The Royal Mint was honoured with creating the medals for the London Olympic and Paralympic Games. The 2012 London Games were a celebration of British culture. At the opening ceremony, British fictional icon, James Bond, played by actor Daniel Craig, 'jumped from a helicopter' with Her Majesty The Queen, Elizabeth II.