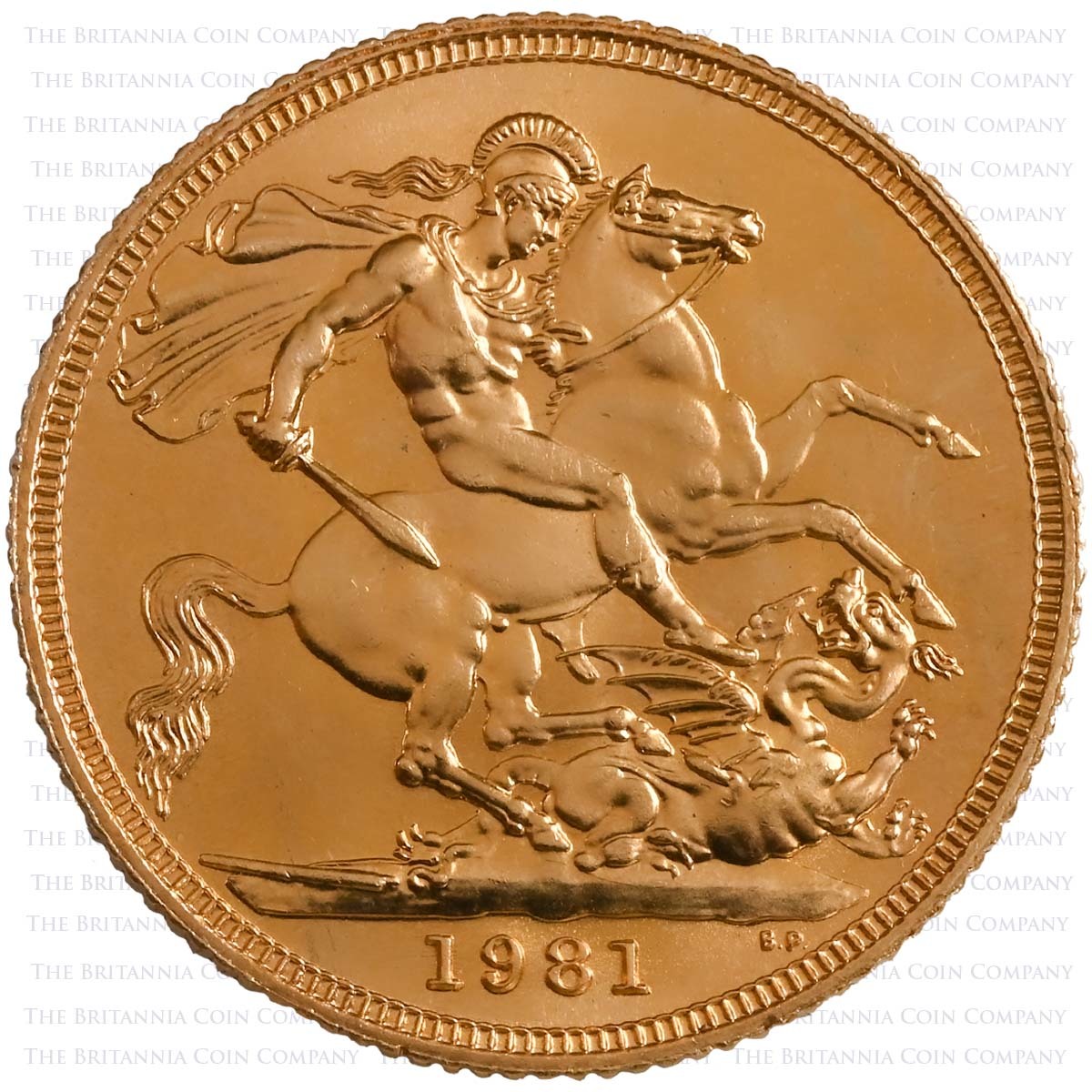 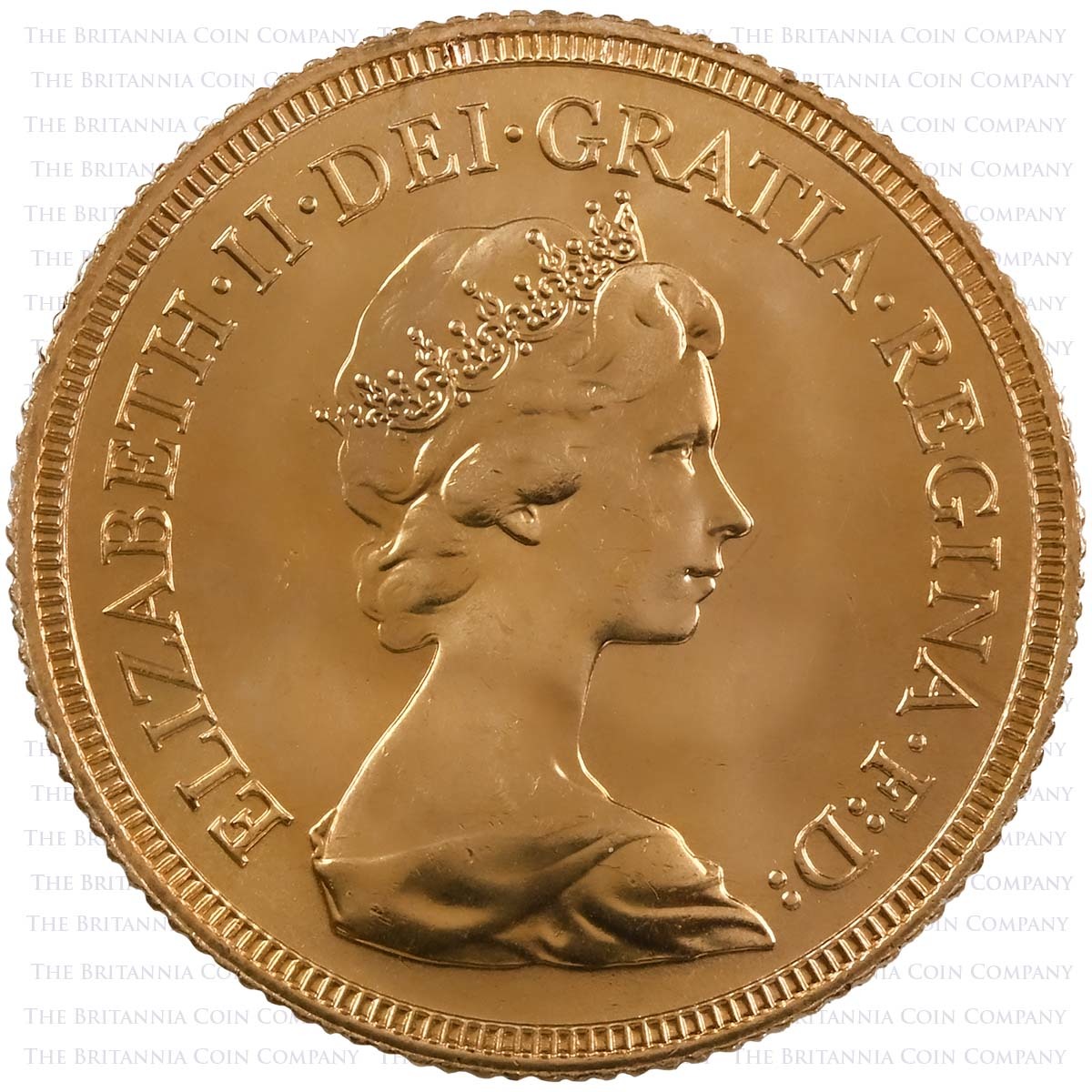 from
£412.01
(VAT Exempt)
This gold bullion Sovereign was released in the year 1981. A high grade Bullion coin, personally chosen by our team and graded at aEF (about Extremely Fine) or above. Extremely Fine or above coins have minimal indications of wear. Ideal for marking the year of a special occasion such as a 40th birthday or Ruby wedding anniversary. Bullion coins are also sold at a lower cost than their Proof versions, making them more affordable too. The Reverse includes the signature Sovereign image of 'St George and the dragon' by Benedetto Pistrucci. The coin's Obverse hosts the 2nd Portrait of HM The Queen, Elizabeth II, by Arnold Machin. The Sovereign is exempt from VAT and Capital Gains Tax and our price is inclusive of fully insured UK shipping. Subject to stock availability.
Quantity
Cost Per Unit
Starts From
1+
£412.01
£412.01

The first of the modern Sovereigns hosted a portrait of King George III and the 'St George and the Dragon' design by Benedetto Pistrucci. Pistruccin was an Italian engraver who became Chief Medallist at The Royal Mint. This 1981 Sovereign coin hosts a portrait of the longest reigning monarch of all time, HM The Queen, Elizabeth II.

The year 1981 saw; the engagement and marriage of Prince Charles and Princess Diana, the beginnings of the Rupert Murdock empire with his purchase of The Times, the first London marathon, riots in Brixton and across the UK, Arthur Scargill elected as leader of the National Union of Mineworkers, and 105 tornadoes hitting Britain in a single night. In entertainment we witnessed; Andrew Lloyd Webber's 'Cats' open on the West End, Bucks Fizz winning the Eurovision Song Contest with 'Making Your Mind Up', the first Indiana Jones film 'Raiders of the Lost Ark' in cinemas and the launch of MTV in the USA. 1981 was a remarkable year in history, now immortalised in coinage.

The Obverse (front, heads) presents Queen Elizabeth II's second portrait by Arnold Machin. An updated version of the design has also appeared on British stamps since 1967. The 2nd Portrait by Machin replaced the original Elizabeth II portrayal by Mary Gillick, to help new British decimal currency stand out when it was released in 1968. The Gillick image of Her Majesty in a wreath is replaced by a tiara, a gift from her grandmother, Queen Mary.

The Reverse (back, tails) of the 1981 gold bullion Sovereign hosts the signature 1817 'St George and the Dragon' design by Benedetto Pistrucci.  In the 19th century, Italian engraver Pistrucci was instructed to create designs for George III's silver and gold coins by William Wellesley-Pole, The Master of The Mint.

The coin includes the inscription, 'DEI GRA REGINA FID DEF', which translates to 'By the Grace of God, Queen, Defender of the Faith'. The inscription refers to HM Queen Elizabeth II's position as Supreme Governor of the Church of England. Elizabeth II has held the role since her accession to the throne in 1952 and Her Majesty is Britain's longest reigning monarch of all time.

The 1981 gold bullion Sovereign coin may be supplied in an acrylic capsule.

St George's legacy dates back to the 3rd century, often depicted as a heroic defender of the Christian faith. The most widely shared story recounts St George as a rescuer on horseback sent to slay a dragon in order to save a young maiden or princess. It is widely believed that the dragon in the mythical tale was slain at Uffington's Dragon Hill, a Bronze-age site just 20 miles from our premises in Royal Wootton Bassett. As the Patron Saint of England, St George celebrated on the 23rd April every year.

This 1981 Sovereign coin is struck to Bullion standard and has legal tender status with a nominal value of one pound sterling. The Royal Mint has produced the modern Sovereign coin since its origins in 1817. It was formerly a circulating coin that was accepted in the UK and around the world. Today, it is an easy way to invest in or collect gold Bullion. The coin's Obverse presents the 2nd Portrait of Her Majesty the Queen, Elizabeth II, by Arnold Machin. This effigy appeared on coins from 1968 until its replacement in 1985. Having reigned for nearly 70 years, Elizabeth II has had five Royal Portraits on coins produced since her accession to the throne in 1952. The Portraits were created by; Mary Gillick (1953-1967), Arnold Machin (1968-1984), Raphael Maklouf (1985-1997), Ian-Rank Broadley (1998-2014) and Jody Clark (2015-). The Maklouf Portrait only appears on Proof Sovereign coins due to the suspension of the Bullion versions between 1983 and 1997.

The 1981 Sovereign coin was created at The Royal Mint. Based at Llantrisant in Wales, The Royal Mint is the official home of British coinage. With over a 1,100 year history dating back to the reign of Alfred the Great and producing currency for 60 countries, it is considered one of the world's leading Mints. Its former home for over 500 years was the Tower of London, before the Mint was relocated to Wales following decimalisation in 1971. A gold Sovereign was the last coin struck in London in November 1975.

In 1981, The Royal Mint issued a commemorative twenty-five pence piece in recognition of the marriage of Prince Charles and Princess Diana. It is estimated that a global TV audience of over 750 million people watched the Royal couple’s wedding being broadcast live.

Based on the current gold price, we will pay a minimum of £360.97 for a 1981 Sovereign. This is on the basis that it's in reasonably good condition and hasn't been mounted in jewellery.