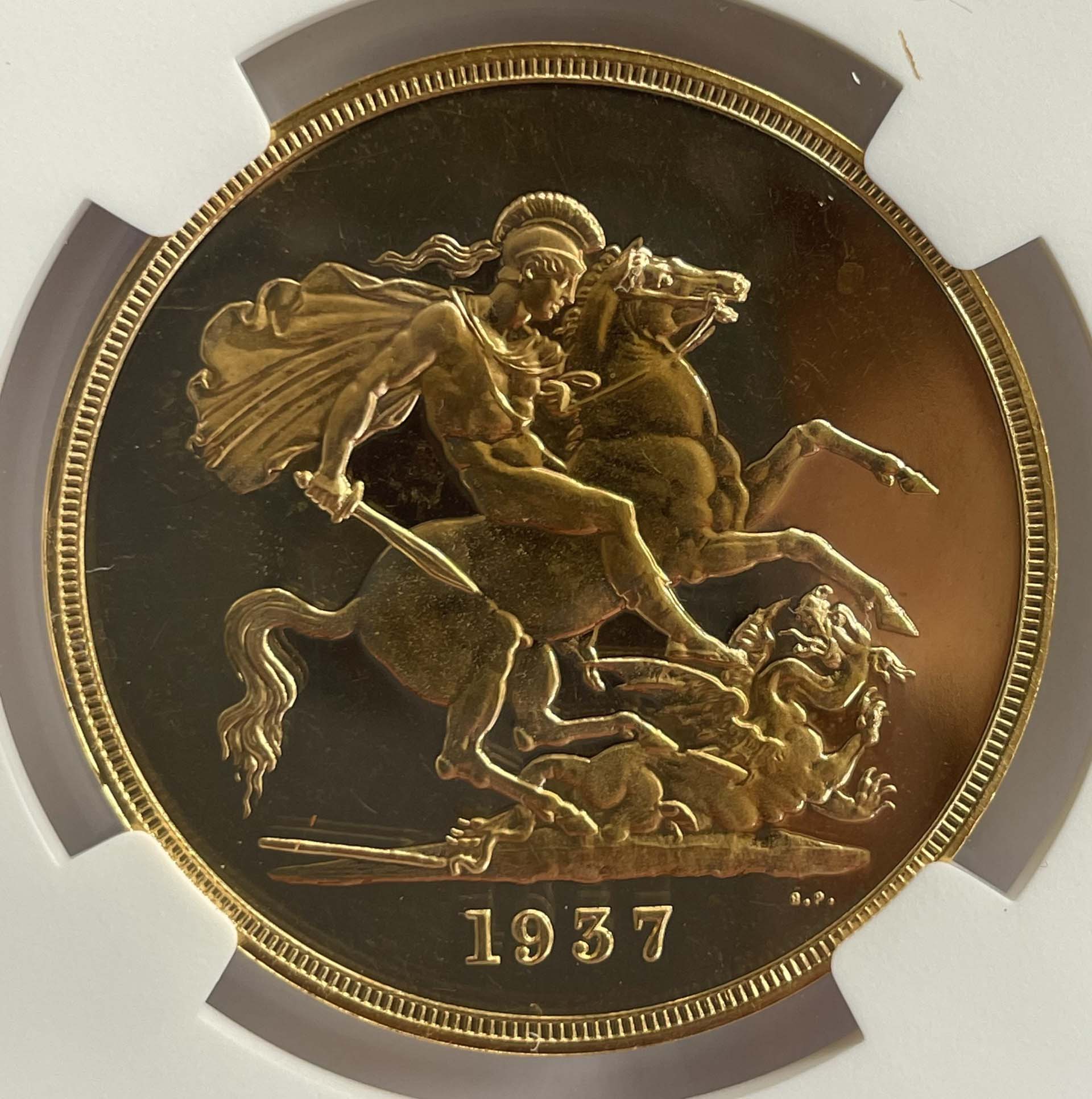 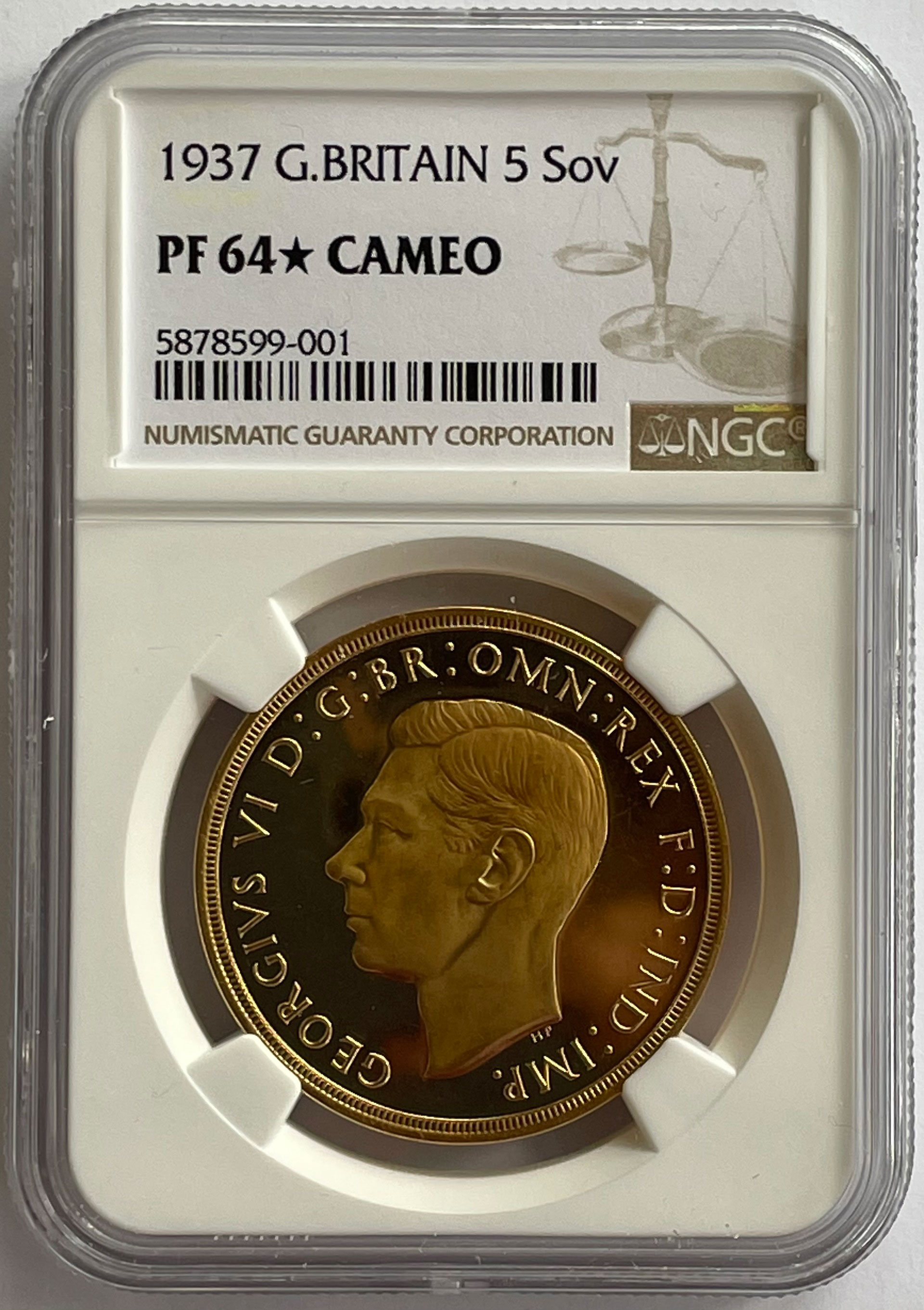 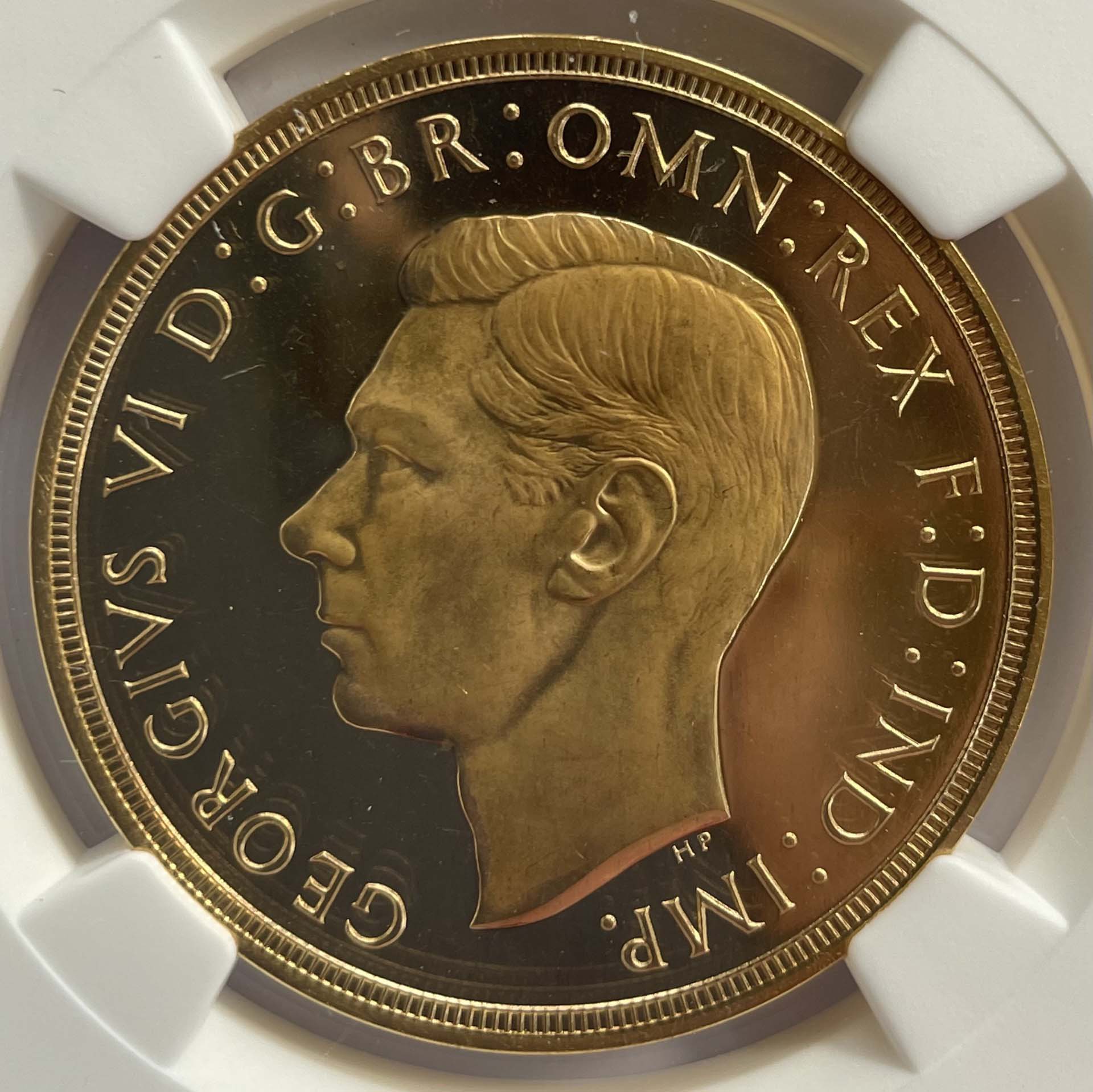 from
£12,950.00
(VAT Exempt)
Graded by the NGC as PF64* Cameo, this stunning 1937 George VI gold proof five-pound coin is a sparkling example of a rare issue. Originally presented as part of a four-coin set with a maximum mintage of 5,001, this series represents the only British gold coins that were issued during the reluctant King’s reign. An exceptionally attractive example, this quintuple sovereign will make an excellent addition to any serious collection.
Log in to get notified when this product is back in stock.
Track Product
You are not logged in. Please Login to track this product.
Description Summary Specification Royal Mint About us

A highly sought-after George VI gold proof five-pound coin, graded by the NGC as PF64* Cameo. This excellent example was minted in 1937 as part of the only issue of gold coins made during George’s reign and features Humphrey Paget’s celebrated portrait.

The 1937 George VI Gold Proof Five Pound features a George on both sides.

The reverse bears Benedetto Pistrucci’s celebrated Saint George and the Dragon engraving, created in 1817 for the first modern gold sovereigns. Used perennially down the decades, the symbolic image of the warrior saint was an obvious choice for the coronation proof set of George VI.

Unexpectedly on the throne in the wake of his brother’s abdication, George VI nevertheless looks every bit the King on the obverse of the 1937 George VI Gold Proof Five Pound. The coins’ legend reads: ‘GEORGIVS VI D : G : BR : OMN : REX F : D : IND : IMP.’ The portrait of the present Queen’s father was designed for his coinage by Humphrey Paget OBE.

A prolific designer of coins and medals, Paget was commissioned to create a coinage portrait of George VI after his success in designing an effigy of George’s brother, Edward VIII.

The minting process for Edward VIII’s coins was due to begin in January 1937 but was suspended following his December 1936 abdication. Paget was tasked with creating a portrait of George in double quick time, turning around a depiction described by the Royal Mint Museum as ‘the classic coinage head of the 20th century’.

This effigy, used on the 1937 George VI Gold Proof Five Pounds, appeared on British and Dominion-state coinage from 1937 until the King’s death in 1952.

This 1937 George VI Gold Proof Five Pound was originally issued as part of a four-coin set, crafted to mark George’s coronation. All the coins in the set – including the five pound, two pound, sovereign and half sovereign – bore the same design, scaled to the specifications of the coin.

By the early twentieth century there was no question of issuing gold coins for circulation as they tended to be worth more as metal than as currency. The extremely limited number that were minted in 1937 were sold directly to collectors.

The coronation proof set represents the only issue of gold coins made during George’s reign to bear his portrait. The coronation of George’s daughter, Elizabeth II, in 1953 saw the issue of another ceremonial proof set with bullion and collectors’ sovereigns appearing in later decades.

The first British five-pound coins were struck in 1820 with subsequent issues largely minted to proof standard, with some circulated Victorian exceptions. A five-pound coin typically appeared in coronation proof sets, alongside other denominations.

Though worth much more than £5, the 1937 George VI Gold Proof Five Pound is legal tender in the UK, making it exempt from Capital Gains Tax. As investment grade gold, the coin is also not subject to VAT, both in the UK and the European Union.

As the only gold quintuple sovereign of George VI, the 1937 George VI Gold Proof Five Pound is highly desirable for that reason alone. It’s a key addition to any sovereign collection, particularly if you already have other denominations from this gold proof issue.

Furthermore, only 5,001 each of the 1937 George VI Gold Proof Five Pounds were ever minted. Whether they are sold individually or in the four-coin set, prices for these scarce pieces continue to rise, seeing a particular boost after the film The King’s Speech invigorated public interest in George VI.

If you are considering adding the sought-after 1937 George VI Gold Proof Five Pound to your collection you cannot go wrong with this stunning example.

This 1937 quintuple sovereign has been graded by the Numismatic Guaranty Corporation™ (NGC®). An NGC grade is an internationally recognised mark of authenticity and guarantees an accurate assessment of a coin’s condition.

But what does PF64* Cameo mean?

PF64 indicates a proof standard coin with a number of miniscule imperfections, hardly visible to the naked eye. NGC grades coins from 1 to 70 with a 70 representing a pristine coin.

The star designation reflects the exceptional eye appeal of this coin for its assigned grade. In other words: it’s a real looker.

Cameo is a grade that applies only to proof standard coins. It is used to identify coins with deeply mirrored fields and devices that are frosted for a nice contrast on both sides of the coin. 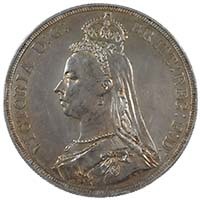 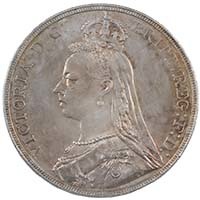