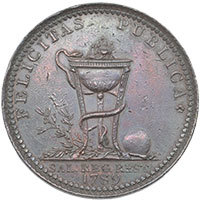 King George III was born in 1728 to Frederick, the son of King George II, and his wife, Augusta of Saxe-Coburg-Gotha. His father died in 1751, which left George as the heir to the throne. When he was 22, his grandfather, King George II, died and the young George inherited the throne and the reins to a prospering Great Britain.

Over his 59 years as king, George came to be loved by his nation. He was sensitive and conscientious in his rule. Not only that, he was the first Hanovarian king to be born in England and the first of them to speak English as his first language. He didn’t possess the ties that his Hanovarian predecessors had to their home country of Germany. Instead, he was entirely dedicated to Britain.

Two weeks before his coronation, he married Charlotte Sophia of Mecklenburg Strelitz. It was a political union but a successful and faithful one. The couple had 15 children in total – nine boys and six girls. They were arguably the first king and queen to focus on the family side of royal life, a value that’s seen within today’s royal family.

Despite all his successes throughout his reign, many remember George III as the king who went mad and the king who lost America – neither of which are particularly flattering. Like many things, however, the truth isn’t quite as straight forward as that.

The Changing Role of the Monarchy

It’s important to know that George III reigned at a time when the monarchy’s power was subsiding greatly. Though the king still had influence, it was the government that had much greater control over the running of the country. George himself was well respected by Parliament but was much less involved in the day to day running of Great Britain than his grandfather before him.

When the events of his reign are viewed through the lens of this knowledge, it becomes a little clearer that perhaps the disappointments of the era can’t be blamed entirely on King George III.

So how did Britain come to lose America under George’s reign?

The Stamp Act and the American Revolutionary War

In the 1760s and 1770s, Britain was in need of money. The Seven Years War had cost the nation greatly and it was gearing up for further wars with France and Spain. There was a big cost to keeping Britain’s overseas territories in order, too.

With the support of the king, Parliament looked to its American colonies as a way of earning some more money. It issued the Stamp Act of 1765, which stated that much of the American colonies’ printed materials had to be printed on paper bearing an embossed tax stamp produced in England. Americans had to pay the tax by buying the paper.

There was uproar in America. They were furious that they’d been taxed despite not being represented in Parliament and outright refused to buy the stamped paper. In the end, Parliament had to repeal the act the following year for fear of a revolt.

That wasn’t the end of it, however. Still in need of money, Britain carried on earning revenue in the form of duties imposed on goods that were imported into the British colonies. It also attempted to gain more control over North America.

Many attribute the loss of America to King George III. He hadn’t wanted to see American independence, but it was parliament that implemented the policies that led to the war in the first place.

Another of King George III’s famous attributes was his madness. Though the theory that his symptoms were caused by a physical disorder called porphyria was spread by Alan Bennett’s play, The Madness of King George III, it’s recently been found that it was, in fact, the result of mental illness – likely bipolar.

The king had suffered through a number of bouts of this somewhat mysterious sickness but in 1811 he became too ill to rule Britain. He agreed to sign the Regency Bill, which meant that his son, who was also called George, would act as regent and rule on his father’s behalf.

The young George ruled as Prince Regent for nearly 10 years, from 1811 until the king’s death in 1820. Throughout the Regency period, as it’s become known, the Prince Regent undertook his duties without much enthusiasm and didn’t take much interest in politics. It was a momentous era, however, full of social and economic change, which ended with the Prince Regent becoming King George IV.