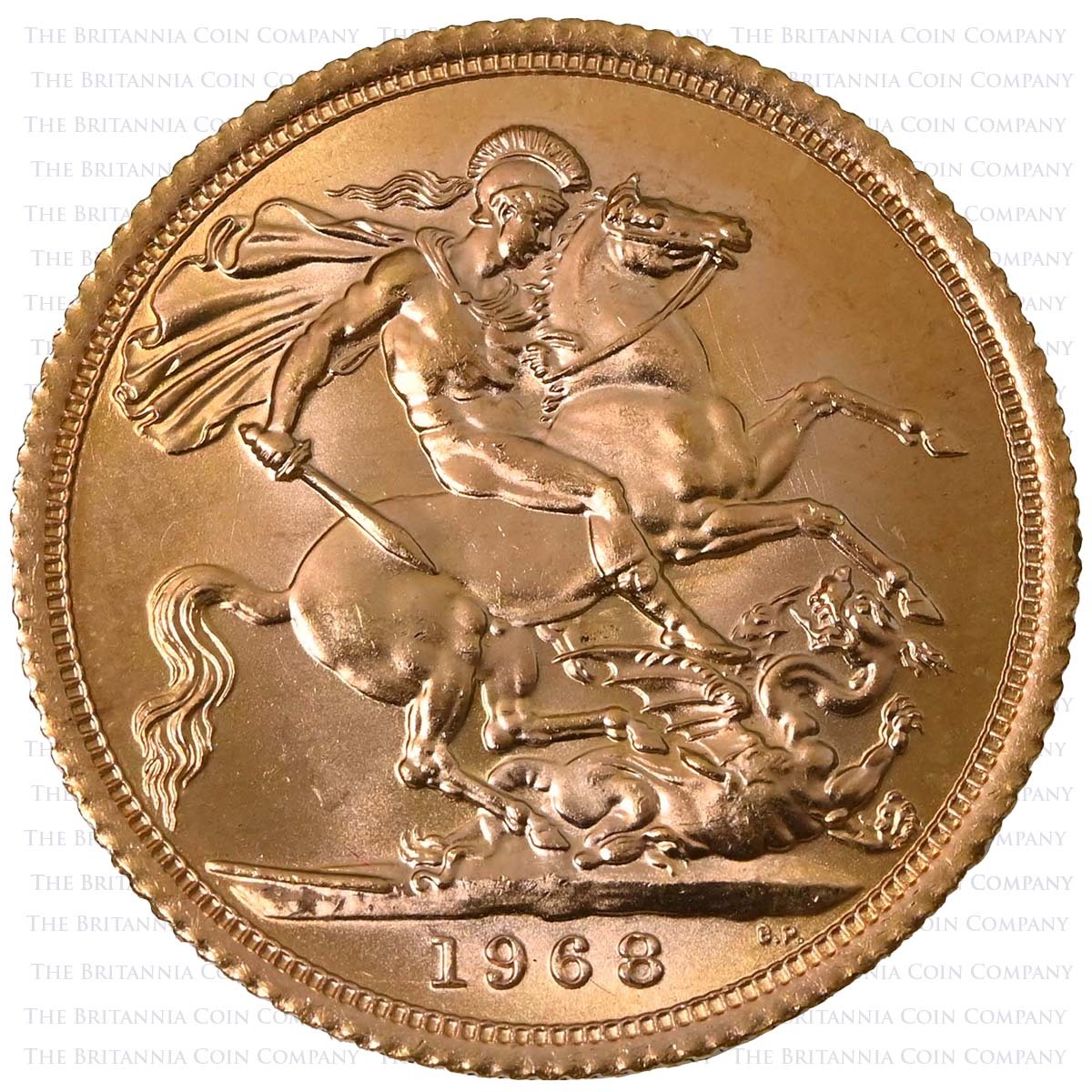 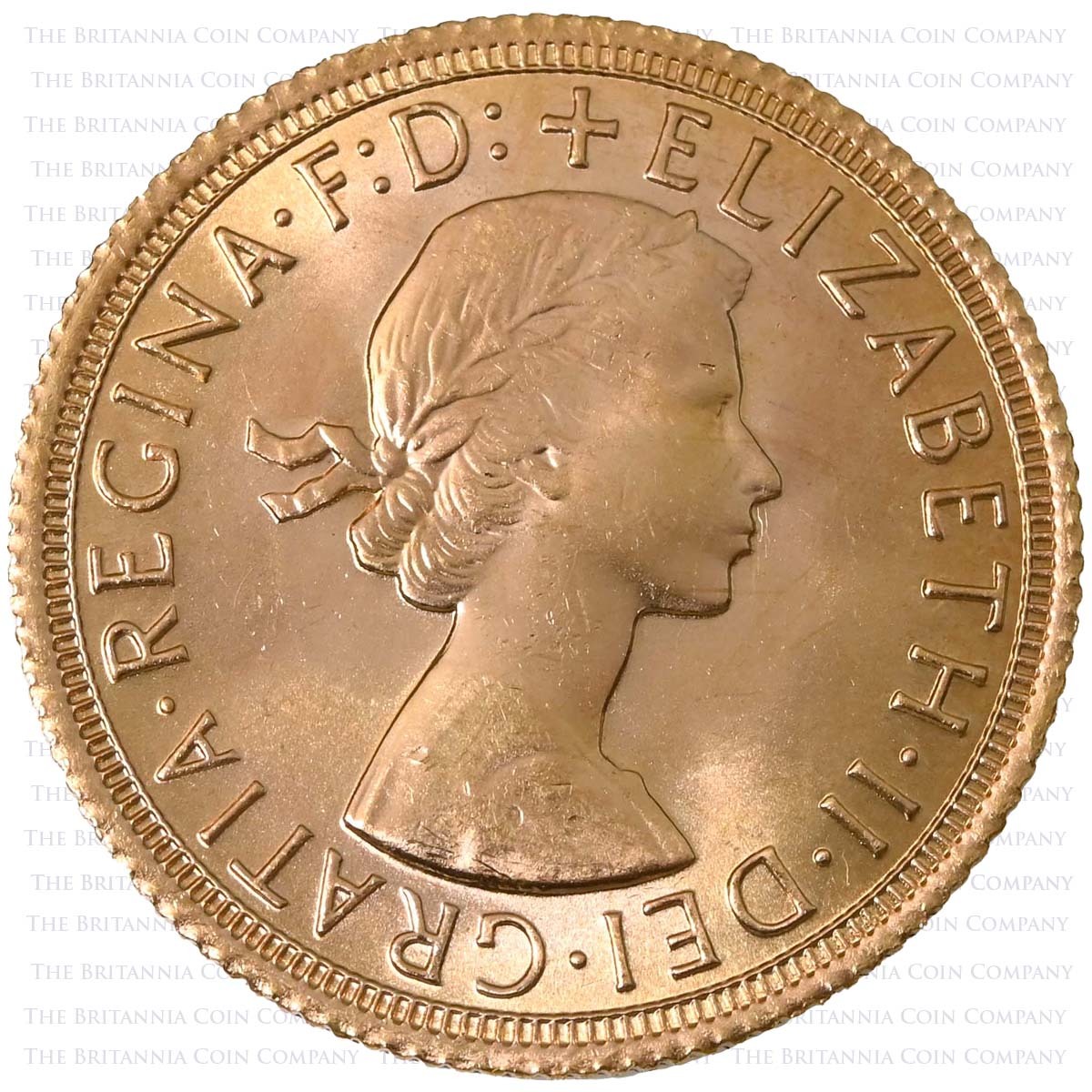 from
£411.89
(VAT Exempt)
This gold bullion Sovereign was released in the year 1968, the last Sovereign produced before decimalisation and The Royal Mint's move to Wales. The next Sovereign would not be minted until 1974. A high grade Bullion coin, chosen by our Britannia team and graded at aEF (about Extremely Fine) or above. Extremely Fine or above coins have very little indications of wear. Bullion coins are also sold at a lower price than their Proof versions, making them more affordable. The Reverse includes the signature depiction of 'St George and the dragon' by Benedetto Pistrucci. The coin's Obverse hosts the 1st Portrait of HM The Queen, Elizabeth II, by Mary Gillick for the last time. The Sovereign is exempt from VAT and Capital Gains Tax and our price is inclusive of fully insured UK shipping. Subject to stock availability.
Quantity
Cost Per Unit
Starts From
1+
£411.89
£411.89

The first of the modern Sovereigns hosted a portrait of King George III and the 'St George and the Dragon' design by Benedetto Pistrucci. Pistrucci was an Italian engraver who became Chief Medallist at The Royal Mint. This 1968 Sovereign coin hosts a portrait of the longest reigning monarch of all time, HM The Queen, Elizabeth II.

The year 1968 was characterised by; Vietnam War protests in the US, the assassination of civil rights leader Martin Luther King Jr. and US Presidential candidate Robert F. Kennedy, the launch of the Boeing 747 (Jumbo Jet), Apollo 8 reaching the moon, the outbreak of Hong Kong Flu, the beginning of The Troubles in Northern Ireland, the Prague Spring and Paris riots, the election of US President Richard Nixon, Black Power salutes at the Olympic Games, The Beatles release of hit single 'Hey Jude' and the horrors of famine and war in Biafra (now Nigeria). 1968 was a significant year in history, now immortalised in coinage.

The Obverse (front, heads) presents Queen Elizabeth II's first portrait by Mary Gillick. The first Portrait of Elizabeth II was issued on British coinage in 1953, the year of Her Majesty's Coronation. The image hosts a youthful uncrowned Queen, which is still used on Maundy Money today. The Royal Maundy traditions date back to the Bible, with generations of monarchs giving to the poor on Maundy Thursday. The first Maundy Money ceremony took place in 1662, when Charles II gave his subjects undated hammered coins. By 1670, it was customary to give a dated set of four coins. Today, recipients of Royal Maundy are elderly men and women, chosen for their dedication as Christians in their communities. However, they are now given a red purse containing ordinary coins and a white purse with silver Maundy Money.

The Reverse (back, tails) of the 1968 gold bullion Sovereign hosts the signature 1817 'St George and the Dragon' design by Benedetto Pistrucci. In the 19th century, talented Italian engraver Pistrucci was instructed to develop designs for George III's silver and gold coins by William Wellesley-Pole, The Master of The Mint and the Waterloo Medal for the British Government, a commission which took the artist 30 years to create.

No Proof version of the 1968 gold Sovereign was issued. This 1968 bullion coin may be supplied in an acrylic capsule.

The Reverse of this 1968 Sovereign depicts 'St George and his dragon', in the classic design by Benedetto Pistrucci. The Obverse design of Her Majesty, Queen Elizabeth II is the first portrait design, by Mary Gillick. This is the last time we see Gillick's Portrait of Her Majesty on a Sovereign coin as the UK moves to decimal coinage by 1971.

This 1968 Sovereign coin is struck to Bullion standard and has legal tender status with a nominal value of one pound sterling. The Royal Mint has produced the modern Sovereign coin since its origins in 1817. It was formerly a circulating coin that was accepted in the UK and around the world. Today, it is an easy way to invest in or collect gold Bullion. The coin's Obverse presents the 1st Portrait of Her Majesty the Queen, Elizabeth II, by Mary Gillick. Having reigned for nearly 70 years, Elizabeth II has had five Royal Portraits on coins produced since her accession to the throne in 1952; Mary Gillick (1953-1967), Arnold Machin (1968-1984), Raphael Maklouf (1985-1997), Ian-Rank Broadley (1998-2014) and Jody Clark (2015-).

With over 1,000 years of history dating back to the reign of King Alfred the Great and producing currency for many countries, The Royal Mint is considered one of the world's leading Mints and the official home of British coinage. Its former home for over 500 years was the Tower of London, before the Mint was relocated to Wales following decimalisation. The 1968 gold bullion Sovereign coin was the last Sovereign of the 1960s, with the Sovereign not minted again until 1974. A gold Sovereign was also the very last coin to be struck in London in November 1975.

St George is rumoured to have slain the dragon just 20 miles west of our premises in Royal Wootton Bassett. The Britannia Coin Company of Royal Wootton Bassett was established to offer market leading prices to collectors and investors. The Britannia Coin Company handles an array of rare, commemorative and investment coins like this 1968 gold bullion Sovereign. The range includes gold, silver and other precious metal modern coins to ancient, hammered and world issues from across the globe.

Based on the current gold price, we will pay a minimum of £368.15 for a 1968 Sovereign. This is on the basis that it's in reasonably good condition and hasn't been mounted in jewellery.