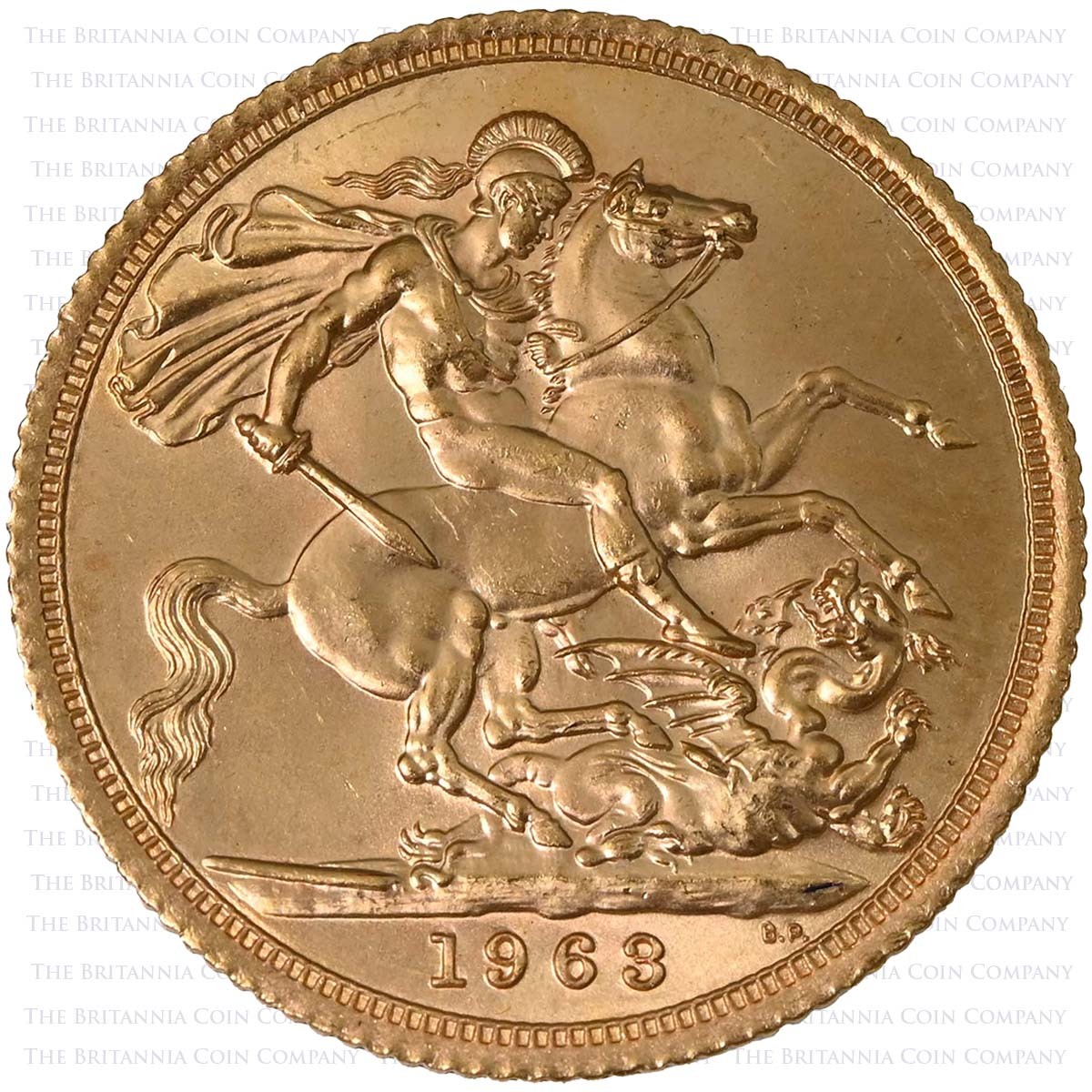 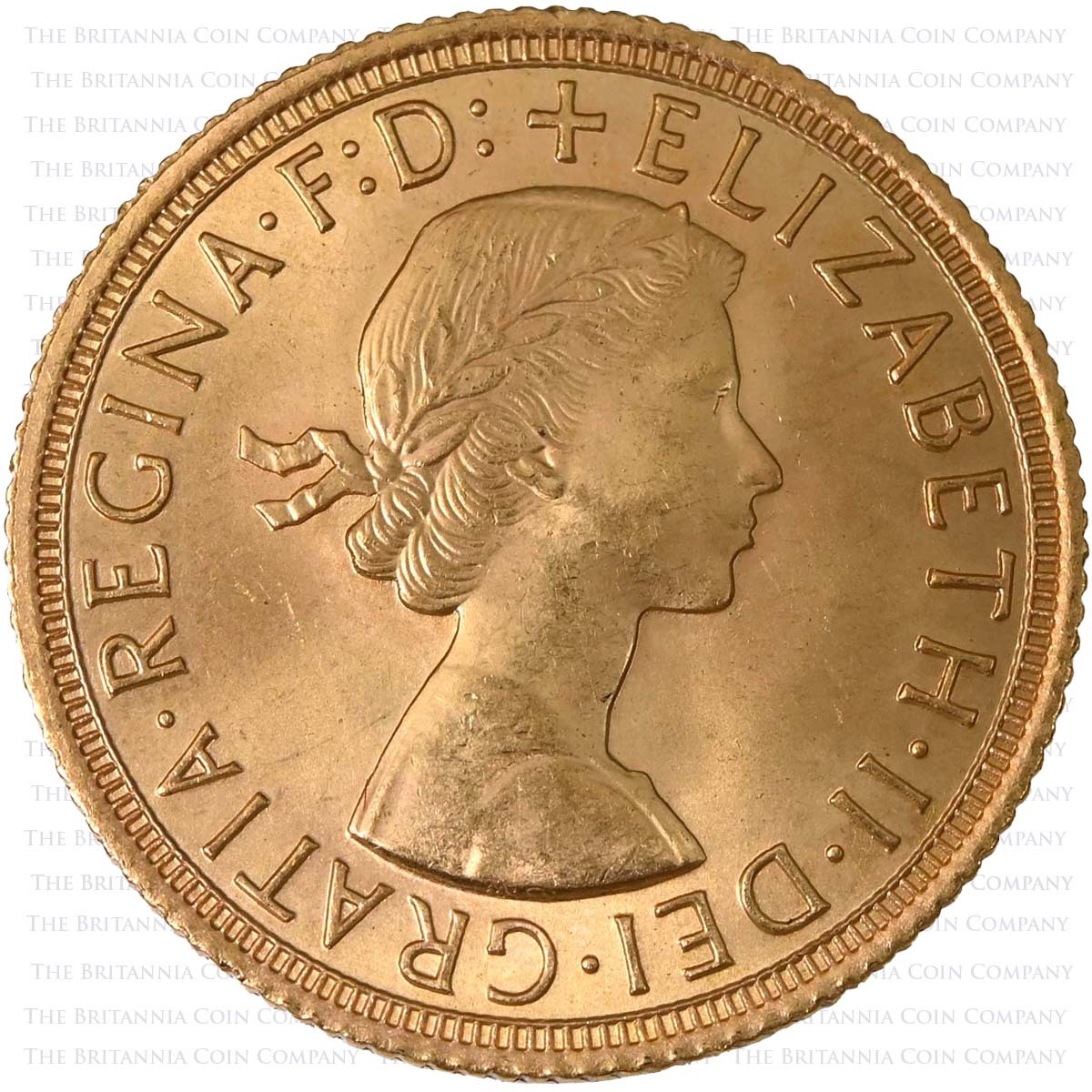 from
£413.10
(VAT Exempt)
Released in 1963, this gold bullion Sovereign is personally selected by our team and graded at aEF (about Extremely Fine) or above. Coins graded at Extremely Fine or above have few signs of wear. Bullion coins are also less costly than their Proof counterparts, making them more cost-effective. Ideal for marking a special occasion such as a wedding, birthday or anniversary. The Reverse hosts the classic 'St George and the dragon' design by Benedetto Pistrucci. The Obverse presents the 1st Portrait of HM The Queen, Elizabeth II, by Mary Gillick. The Sovereign is exempt from VAT and Capital Gains Tax and our price is inclusive of fully insured UK shipping. Subject to stock availability.
Quantity
Cost Per Unit
Starts From
1+
£413.10
£413.10

The first of the modern Sovereigns hosted a portrait of King George III and the 'St George and the Dragon' design by Benedetto Pistrucci. Pistrucci was an Italian engraver who became Chief Medallist at The Royal Mint. This 1963 Sovereign coin hosts a portrait of the longest reigning British monarch of all time, HM The Queen, Elizabeth II.

'I have a dream', cried Martin Luther King Jr to over 250,000 people marching for black civil rights in Washington D.C in the summer of 1963. The year 1963 was also characterised by; US President J F R Kennedy's 'I am a Berlinger' speech at the Brandenburg Gate in Berlin and later his assassination back home in Texas, the Profumo Affair in Britain, The Great Train Robbery, The Beatles hitting the music scene with their debut album 'Please Please Me', Russia, the US and the UK agreeing to a Nuclear Test Ban Treaty, the end of UK National Service, Ford beginning production of the Ford Anglia, Sir Alec Douglas-Home elected British Prime Minister, The National Theatre's first show 'Hamlet' under artistic direction of Laurence Olivier, BBC broadcasting the first episode of 'Doctor Who' and the release of the new lava lamp. 1963 was a poignant year in history, now immortalised in coinage.

The Reverse (back, tails) of the 1963 gold bullion Sovereign hosts the signature 1817 'St George and the Dragon' design by Benedetto Pistrucci. In the 19th century, talented Italian engraver Pistrucci was instructed to develop designs for George III's silver and gold coins by William Wellesley-Pole, The Master of The Mint and the Waterloo Medal for the British Government, a commission which took the artist 30 years to create.

No Proof version of the 1963 gold Sovereign was issued. This 1963 bullion coin may be supplied in an acrylic capsule.

This 1963 Sovereign coin is struck to Bullion standard and has legal tender status with a nominal value of one pound sterling. The Royal Mint has produced the modern Sovereign coin since its origins in 1817. It was formerly a circulating coin that was accepted in the UK and around the world. Today, it is an easy way to invest in or collect gold Bullion. As the longest reigning British monarch, Elizabeth II has had five Royal Portraits on coins produced since her accession to the throne in 1952; Mary Gillick (1953-1967), Arnold Machin (1968-1984), Raphael Maklouf (1985-1997), Ian-Rank Broadley (1998-2014) and Jody Clark (2015-).

Many people can recall exactly where they were on 22nd November 1963. Time is said to have stood still across the world when it was announced that US President J.F.R. Kennedy had been assassinated in Texas. The following year, the US Mint released a special edition silver Half Dollar in honour of the President with a design personally approved by his wife Jackie and brother Robert. On issue to the public, the queue to obtain one of these tribute coins stretched an entire block’s length round the US Treasury Department.

Based on the current gold price, we will pay a minimum of £369.23 for a 1963 Sovereign. This is on the basis that it's in reasonably good condition and hasn't been mounted in jewellery.