Minting Technology through the Ages

Mints are the workshops where coins are crafted. Though the equipment these facilities use has changed a lot in the last 2,700 years, their work has always been on the cutting edge of economic and technological innovation. Highly regulated to discourage counterfeiting, the minting process was for centuries a closely guarded secret.

We're unlocking those mysteries on The Britannia Coin Company blog in a whistle stop tour of minting technology through the ages. It's tough to condense more than two millennia of complex history into a short article but we hope you'll enjoy reading.

The earliest metal money was neither minted nor coin-shaped. Portable, circular, manufactured coinage appears to have been innovated independently in three separate corners of the globe, around the sixth-century BCE: 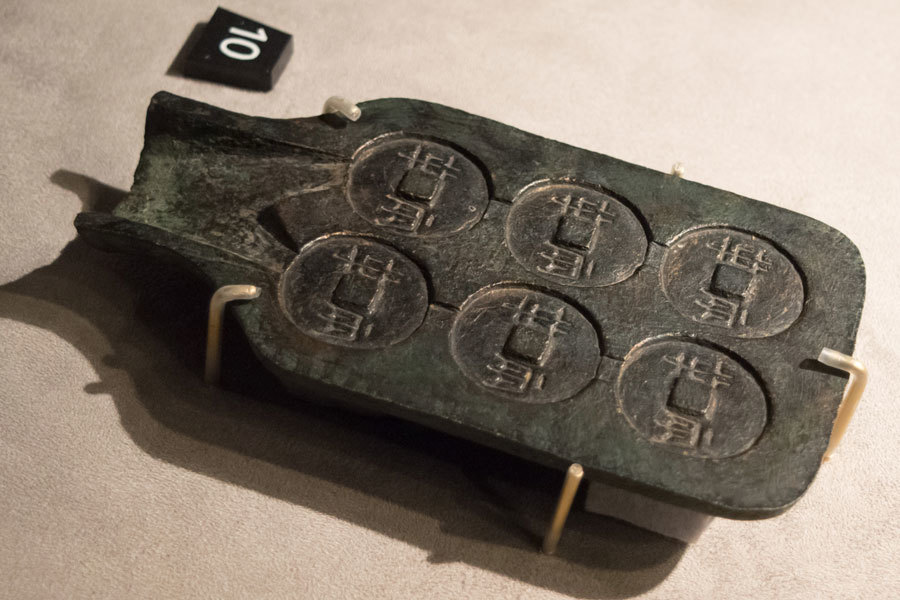 Mould used for casting Ban Liang coins, a type of cash coin and the first unified currency of the Chinese empire. Used during the Warring states period, circa  475-221 BCE. Photo by Difference engine via Wikimedia Commons. CC BY-SA 4.0.

Those first European coins were the product of a state-sponsored mint located in the Kingdom of Lydia, modern Turkey. This mint created coins in gold, silver and electrum, a naturally occurring alloy. The artisans who worked in these early mints produced their wares individually, by hand.

Their coins started life as a blank piece of metal of a predetermined weight, known as a planchet. This was heated, placed on an anvil and a die, made of bronze, positioned atop it with tongs. The die, bearing an engraved design was then struck with a hammer, impressing its pattern.

The distinctive lion that featured on early Lydian coins acted as a state seal, conferring official status and guaranteeing value to bearers. This crucial feature, as well as the manufacturing process, were soon adopted by other kingdoms who hammered coins with their own symbols.

A Lydian 1/3 Stater coin, made from electrum, circa 610-560 BCE. The distinctive 'Lydian Lion' design to the obverse is the result of the die, the reverse bears a 'square incuse' caused by the sharp edge of the anvil. Photo by the Classical Numismatic Group via Wikimedia Commons. CC BY-SA 3.0.

New mints soon sprung up around the Mediterranean, mass producing thousands of coins. Quite quickly, it became common to use a pair of dies, resulting in distinct but equally detailed faces. The lower die was made to sit in a recess on the anvil. Sometimes the design was cut into the anvil itself.

To get the high relief effect, typical of Greek coins, necessitated at least two blows to the upper die. A two-pound hammer, wielded by a strong arm, could exert a force of seven tonnes on the die. Less force was required if the planchet was heated which also extended the die's usable lifespan.

Experimental archaeology has demonstrated that a single craftsman could feasibly produce 100 coins per hour via this method. With several persons involved – one holding the die in place with tongs, one positioning the planchet and another wielding the hammer – more could be minted. 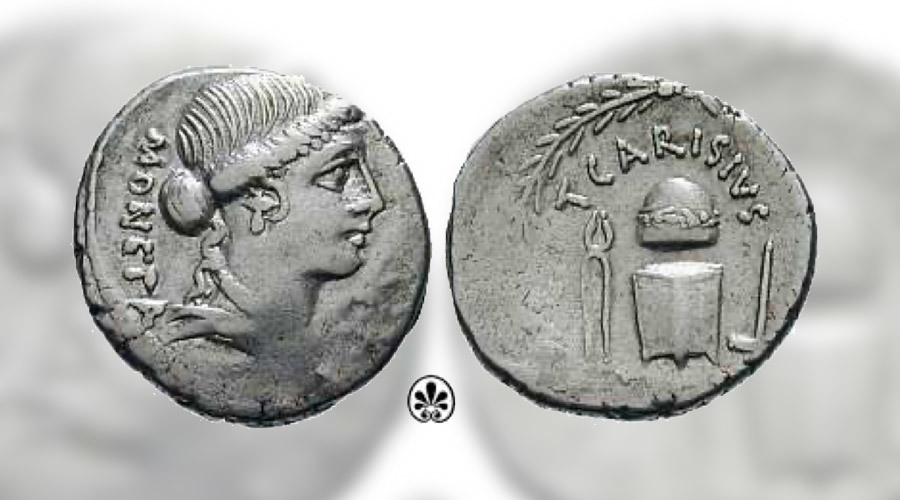 This Roman Denarius, issued by Titus Carisius, displays the tools needed for creating hammered coins on its reverse: an anvil, die, tongs and hammer. Photo by the Classical Numismatic Group via Wikimedia Commons. CC BY-SA 3.0.

Did you know? The word 'mint' comes from the Latin 'moneta', also the source of the English word 'money'. Juno Moneta, an epithet of Juno, was a Roman goddess, worshiped particularly in and around the city of Rome. Her temple doubled as a mint, leading to her name becoming associated with currency and coin production.

The same basic minting techniques employed in the ancient world would remain in use for nearly two thousand years. Increased demand, however, fuelled the development of time saving advances, like hammering onto sheets of metal, rather than planchets, and then cutting out the coins.

Even with this innovation, coins were rarely exactly uniform in shape or the pattern perfectly centralised. This encouraged the practice of 'clipping': trimming off the edges and profiting from the metal. This illegal practice was countered by 'milling' or 'reeding': carving the edge of the coin.

In earlier periods, mints producing coinage were numerous, each state having several. In the later Middle Ages however, several countries established a unified, primary mint which issued the majority of official coinage. England's Royal Mint, for instance, was centralised to London in 1279. 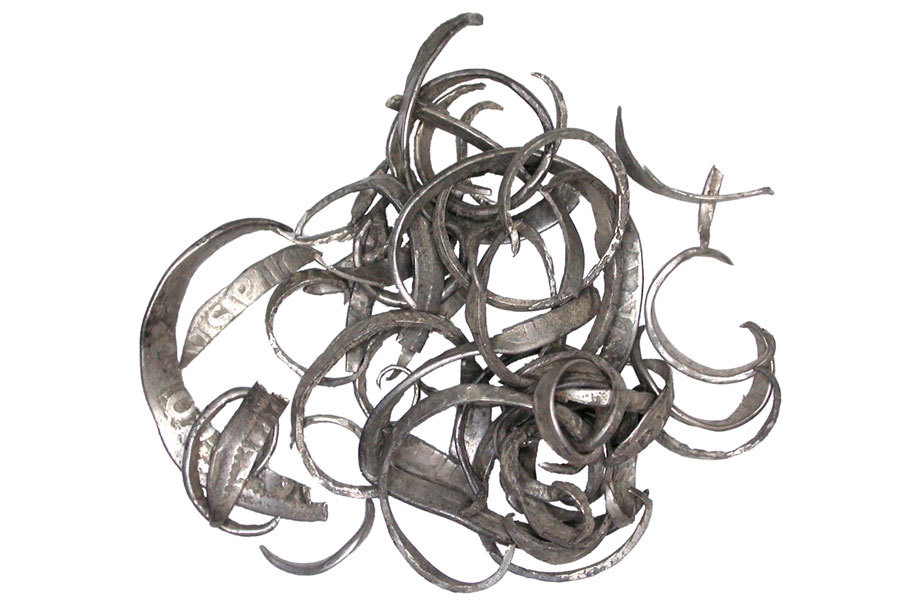 Minting technology evolved to outsmart counterfeiters and debasers. One of the most common criminal practices was coin clipping which was tackled via the introduction of milled edges. This image shows a collection of clipped edges from a medieval coin hoard. Photo by The Portable Antiquities Scheme / The Trustees of the British Museum via Wikimedia Commons. CC BY-SA 4.0.

Minting technology was revolutionised by the invention of the screw press, but its adoption was not a linear process. An engineer named Aubin Olivier introduced the process to France in the 1550s, utilising cutting-edge equipment invented by a mysterious Augsburg goldsmith.

The machine produced perfectly round coins that were difficult to counterfeit, thanks to the hard to replicate tech and reduced ability to clip uneven edges. However, it required fewer men to operate, making it unpopular among workers and leading to its falling out of use after only a few decades.

Machine minting was introduced and abandoned twice in England, first during the reign of Elizabeth I and then again prior to the Civil Wars. After the Restoration of the Stuart monarchy, the screw press was again revived with the assistance of a Frenchman, Peter Blondeau. 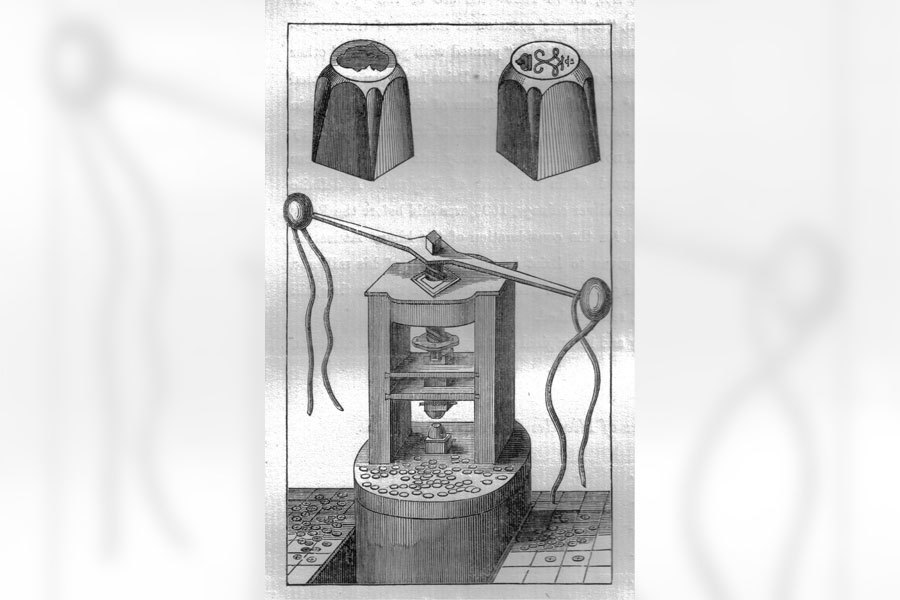 A later screw press mill for machine minting coins. The weighted balance arm was operated by at least two 'spinners' who sent the pile crashing down onto the stationary lower die before spinning the screw upwards again so a new planchet could be set in place by a 'moneyer'. Illustration via Wikimedia Commons. Public domain.

Did you know? Aubin Olivier, who introduced the screw press to France, also created a method of milling the edges of coins, making clipping easy to detect. His technique was improved on with the invention of the Castaing machine which could add lettering to edges and was first used by French mints in the 1680s.

From 1789, the Soho Mint struck privately commissioned coins and medals using machines designed by Boulton which mechanised the minting process. But Boulton's ultimate aim was to produce official coinage and stamp out counterfeit copper coins; endemic to British currency at the time.

'The finest and most difficult coin that is possible to make may be imitated though not counterfeited' – Matthew Boulton, 1799.

Each of Boulton's steam-driven machines were capable of minting up to 84 coins per minute and it was this incredible production rate that made them sought after by mints across the world. He was contracted to produce copper 'cartwheels' in 1797 and later supplied equipment to the Royal Mint. 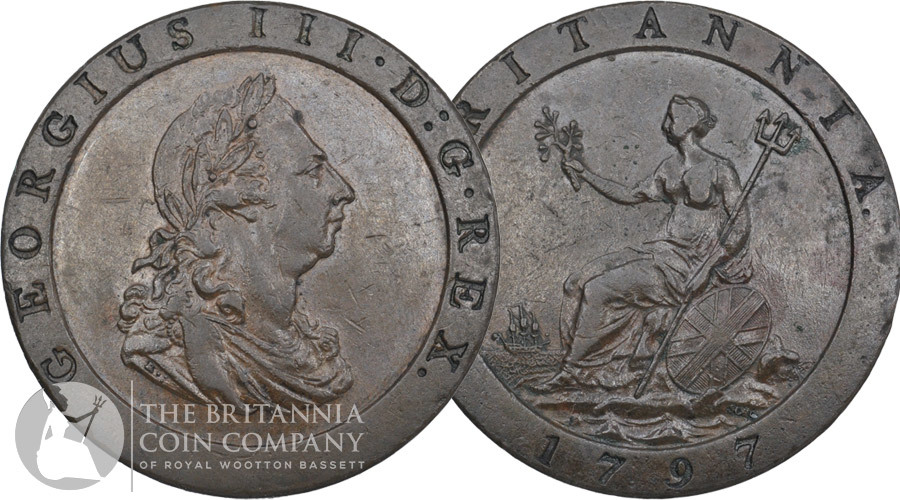 Copper 'Cartwheel' Penny coin of George III, made at Soho Mint in 1797. Among the earliest mechanised, machine-made coinage to circulate in Britain.

Did you know? Birmingham was an important centre for minting development. Soho Mint's steam screw presses were later used by the Birmingham Mint which operated as a private enterprise, cooperating with the Royal Mint to produce coins for more than 100 countries over the next 200 years.

The presses first employed at the Soho Mint remained in use for more than 80 years. That's not to say, however, that minting technology did not advance. By 1840, the Presse Monétaire, another steam-powered coin press, invented by German engineer Dietrich Uhlhorn, was widely used.

The Uhlhorn Press, as it became known, was a lever coin press, rather than a screw press. Machines of this type relied on a lever mechanism that impressed the upper die onto the planchet. They sped up production and were the first type of powered coin press to be used by the United States Mint.

Other tech also played its role. The 3D pantograph, invented by James Watt and perfected by Benjamin Cheverton, made it possible to exactly reproduce engravings at varying scales. This meant a beloved effigy, like William Wyon's young head of Victoria, could be used across British currency.

An engraving room at the Royal Mint, circa 1934. The photo shows numerous coin models, mounted on the walls and a reducing machine or pantograph (centre). Photo by Royal Mint via Wikimedia Commons. Public domain.

By the early twentieth century, mints were electrified, making them significantly quieter and cooler than the early furnaces and nineteenth-century coal-fired steam mints. Coupled with electric feeding belts, electric presses automated the minting process, making it much less labour intensive.

Today the minting process starts with the creation of a relief model by an engraver. The model is then reduced onto steel to form a 'hub', which is used to create the die bearing the negative, incuse pattern. This process creates the master hubs and dies and is repeated to create the working dies.

The design process may be aided by computer programs. Counting and bagging is conducted by robots. Coin production today may require a very different sort of craftsmanship to that practiced in ancient Lydia, but minting remains the remit of highly skilled professionals.

William Sharington, the Bristol Mint and the Great Debasement