George V Wreath Crowns: Christmas Presents from the Past 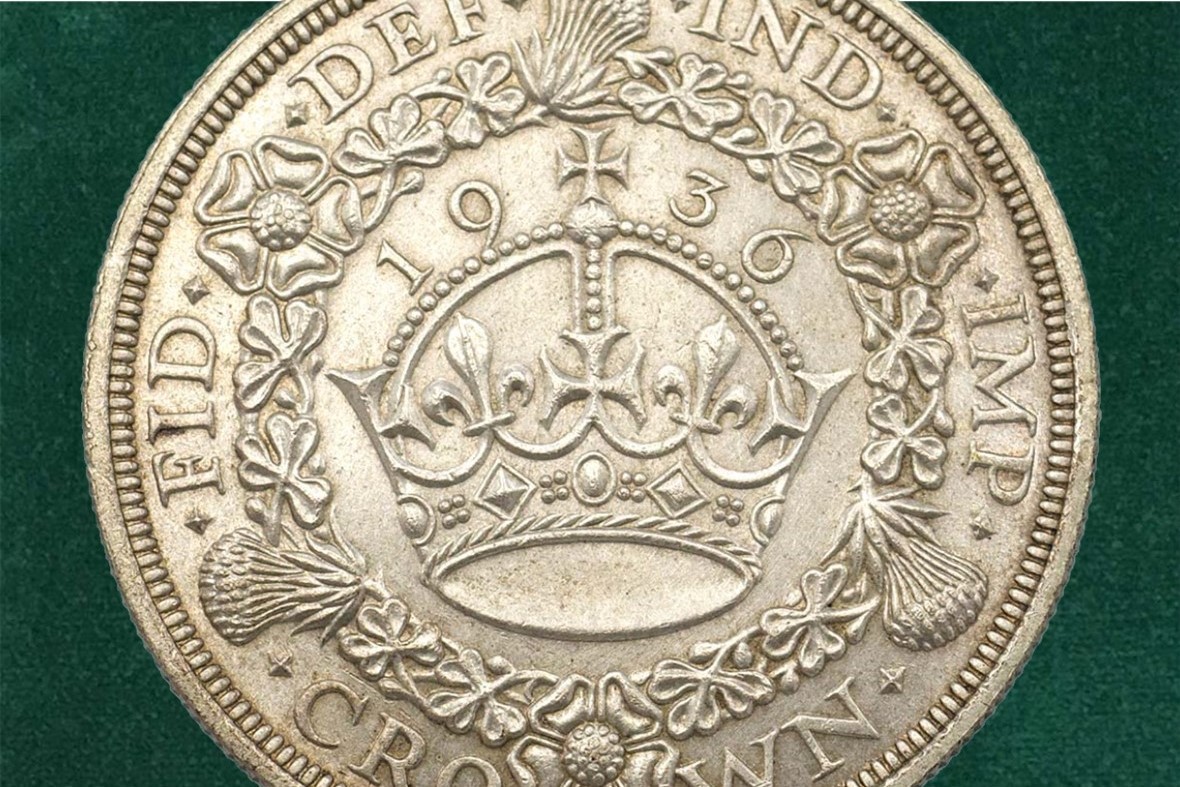 Looking for a numismatic Christmas present? What about a Wreath Crown?

Sometimes known as Christmas Crowns, these silver coins of George V were struck in limited numbers in the late 1920s and early 1930s. But how are they connected to the holiday season? And why were they issued in the first place, more than two decades after Crowns were last minted for circulation.

All the details: below.

Crowns Down The Centuries

The first English Crowns were large gold coins, minted during the reign of king Henry VIII. Silver Crowns were first struck during the brief rule of his son, Edward VI. From the start, these coins held a value of Five Shillings. Their production continued through the Stuart, Georgian and Victorian periods.

For the most part, Crowns are the largest silver coins issued by a given monarch. Collectors enjoy the scale of their designs and the ability to acquire a continuous series. There are some notably rare types - like the 1847 Gothic Crown - but, otherwise, these pieces are accessible to most buyers.

Regular issues of silver Crowns continued for more than 350 years before the denomination fell out of daily use in the late nineteenth century. The regular series petered out in 1902. Proof Crowns were stuck for the coronation of George V in 1911 - bearing a shield reverse and a royal portrait by Betram MacKennal - but otherwise these coins were effectively discontinued. 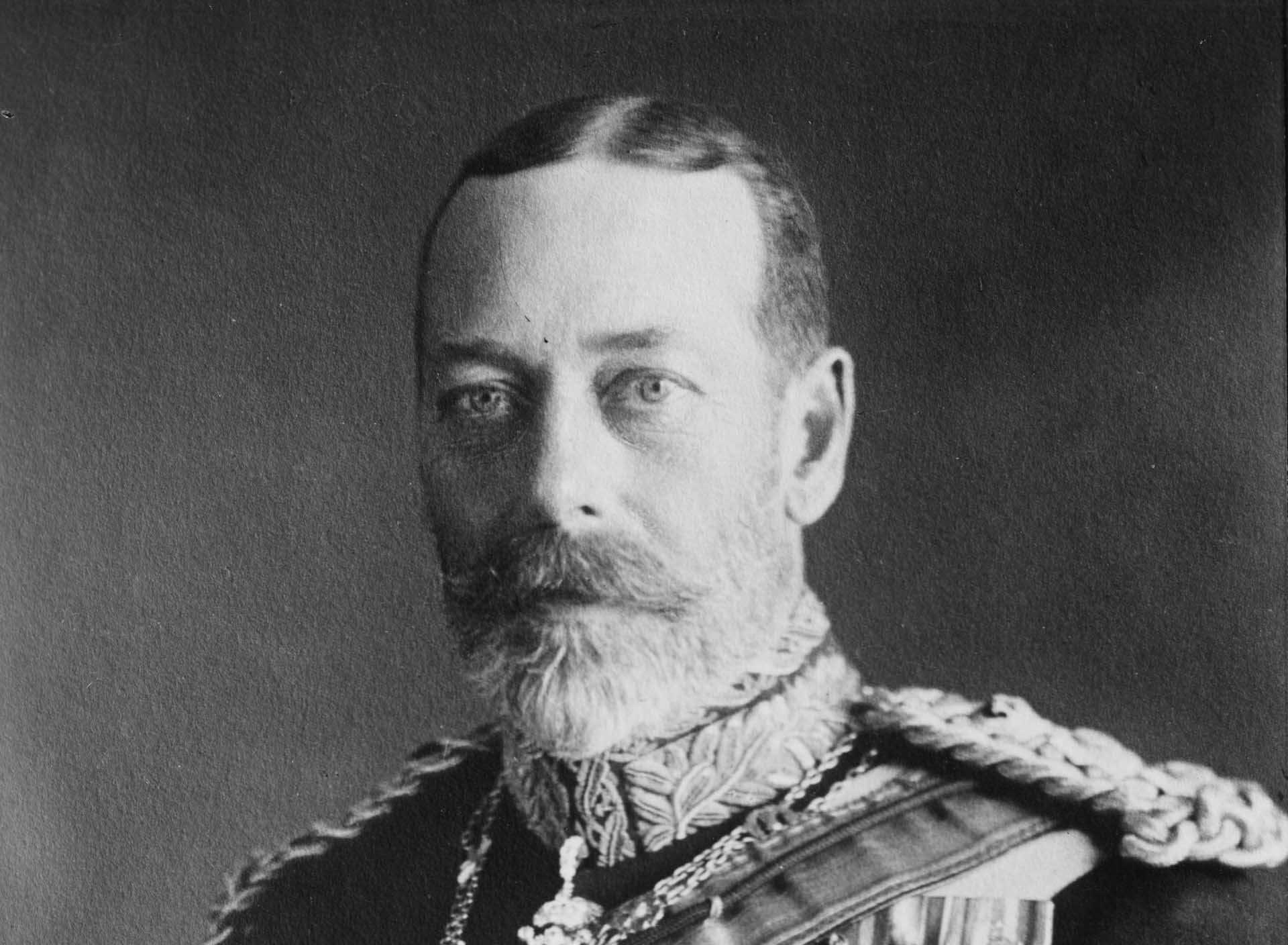 Crowns were not struck in the first decade of George V's reign.

The Crown might have disappeared from British coinage altogether without the passionate support of numismatist, military historian and MP, Sir Charles Oman KBE FBA. Oman was president of the Royal Numismatic Society between 1919 and 1930 and an authority on coinage in the House of Commons. Hansard records him repeatedly decrying the reduction in the silver content of British money, instituted in 1920.

By 1926 Oman was campaigning for a new Crown coin with peace as a theme. Pursuing the issue with the Royal Mint, a reverse design was developed by Francis Derwent Wood, showing a seated Britannia. This was engraved by Humphrey Paget and pattern pieces struck. One of a handful of surviving examples sold for $32,900 in 2016.

The Britannia design was ultimately deemed unsuitable but a new Crown was eventually issued with George V's fourth coinage which saw the reverses of all British silver coins revised.

'My hon. Friend is the last person in the House, am sure, who would suggest that questions so intricate, and interesting, and delicate as those connected with the designs on coinage should be in any way oppressed by hurry.'

The first revived Crowns were minted in 1927. Unlike the rest of the new coinage issued in this year, these new Crowns were issued only as proofs.

The reverse chosen for these coins was the work of George Kruger Gray. A prolific designer and long term contractor for the Royal Mint, he contributed engravings for a wide range of UK denominations as well as the coinage of several other Commonwealth nations. 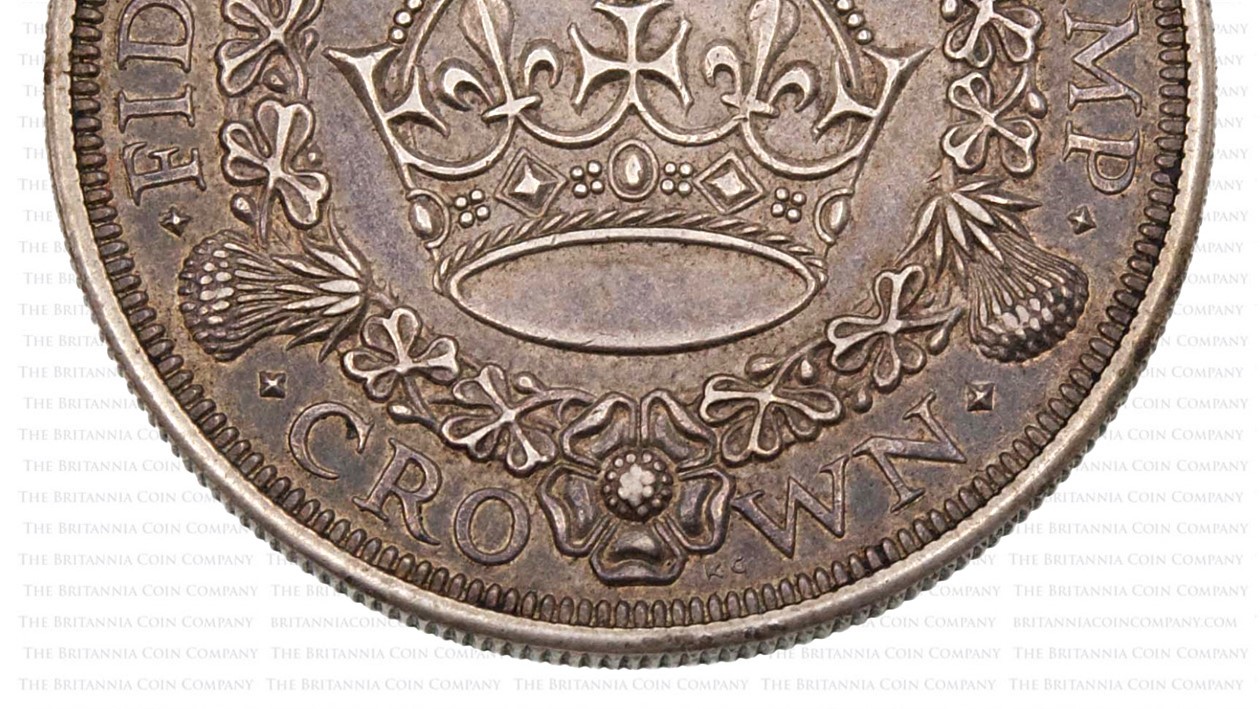 Close up of the reverse of a 1932 silver Wreath Crown.

Also known for his heraldic work, Gray's coins show a deep understanding of symbols and an ability to translate historic motifs into dynamic, modern designs. His engraving for the 1927 George V Crown is no different in this regard, showing a large royal crown, dividing the date, surrounded by a wreath of shamrocks, studded with roses and thistles. The legend '· FID · · DEF · · IND · · IMP ·' appears above.

Gray's design was unusual in that it incorporated the coin's value: something not seen on Crowns since the Commonwealth period. His initials - KG - appear to the right of the lower rose which divides the denomination.

It’s the wreath of foliage that lends these coins their common name: 'Wreath Crowns'. But these George V coins are also known as 'Christmas Crowns'. Why?

Well, wreaths of evergreen had become a popular Christmas decoration in the Victorian period so perhaps something about the otherwise un-Christmassy design reminded people of the holiday season.

More importantly, though, issues after 1927 were struck late in the year and distributed primarily by the Bank of England as Christmas presents for favoured clients. This was back in the days when the UK’s central bank offered some consumer banking services. The practice continued for nearly a decade with new wreath-pattern Crowns minted annually in limited numbers until 1936.

Christmas Crowns were legal tender and the condition of some examples shows that they did circulate but, from the start they were a collectors piece.

The number of wreath crowns struck between 1927 and 1936 varies with the general trend being for smaller mintages as the series proceeded. The figures below are for non-proof coins. A small number of proofs were, however, offered in each year.

The mintage for 1934 is the lowest by far, meaning that Wreath Crowns struck in this year command prices significantly higher than the rest of the type. 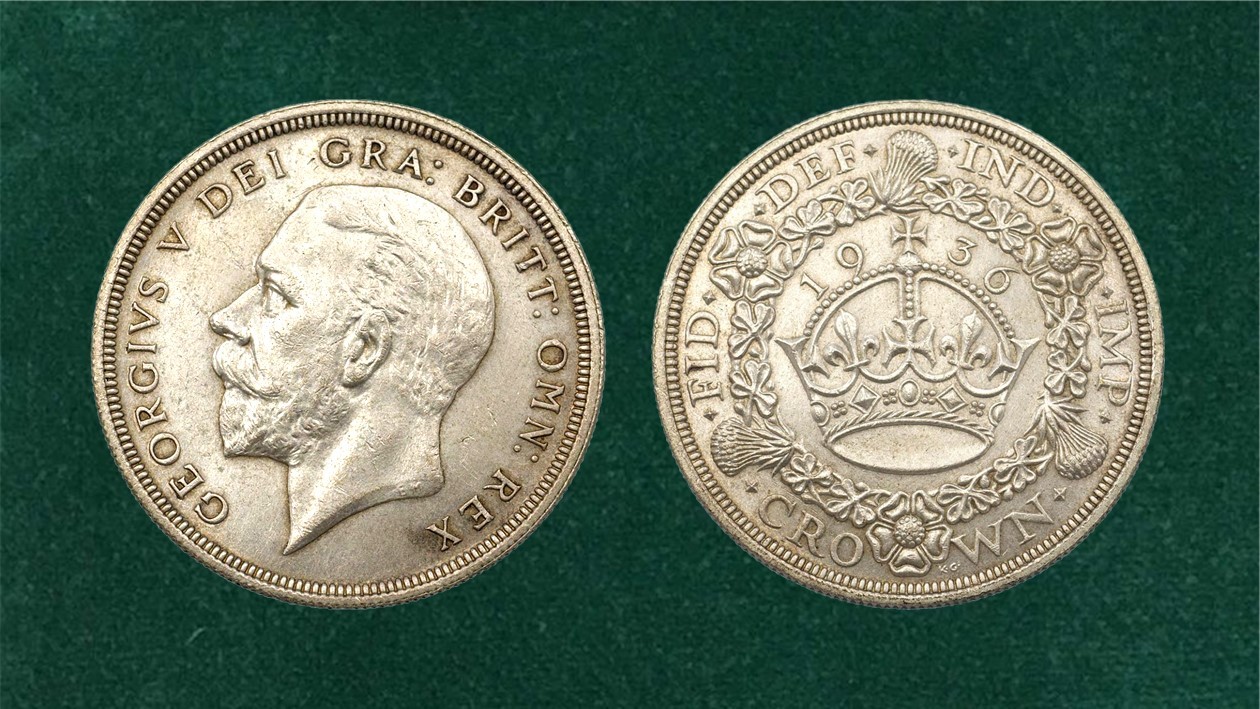 A 1936 George V Wreath Crown: the final coin in this series.

1935 marked George V's Silver Jubilee. In celebration of 25 years on the throne, the Royal Mint issued a special commemorative Crown. Royal jubilees had first been celebrated on coinage when Queen Victoria marked her Golden Jubilee in 1887.

The 1935 Crown featured a modernist reinterpretation of a classic British coin design: St George in the act of slaying a dragon. The engraving, crafted by sculptor Percy Metcalf, shows an armoured Saint, his steed rearing over a prone beast. It's a highly stylised image which shows the influence of Art Deco. The rigid poses of horse and rider led to some criticism and the comparisons with a children's rocking horse which give the 1935 Silver Jubilee Crown its name. 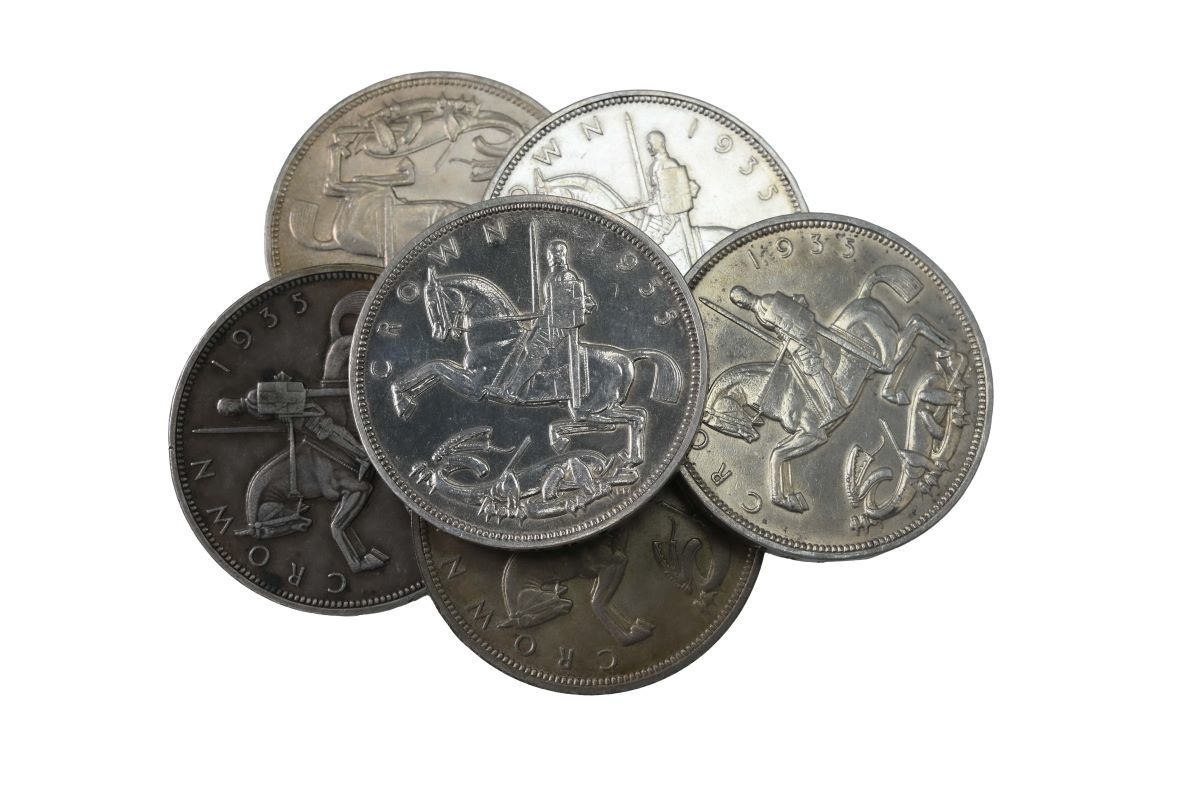 A handful of 1935 Rocking Horse Crowns.

Some 717,269 Rocking Horse Crowns were struck in 1935. In 1936 - the final year of George V's reign - the reverse design reverted to Kruger Gray's wreath. Crown's issued for the coronation of George VI in 1937 bore a royal arms reverse.

George V Wreath Crowns are an outlier - albeit short lived - as an annual issue of a coin that had long ceased to be useful in circulation. They're less of an oddity when viewed as a forerunner of later Royal Mint coins, designed with collectors in mind.

The modern, decimal Crown is a purely commemorative coin with a face value of Five Pounds. Like their Tudor predecessor, these coins are struck in a range of metals, often to commemorate royal events and anniversaries.

We like the new Crowns a lot but there's a particular appeal to those issued under George V. Between the well-balanced floral design, the rarity of some years and the high grade these coins are generally found in, they're a great buy, particularly at this time of year. 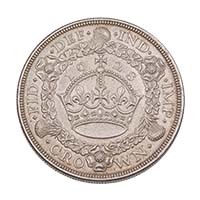 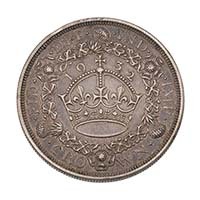 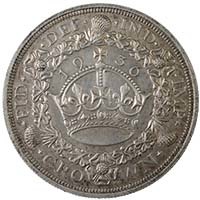